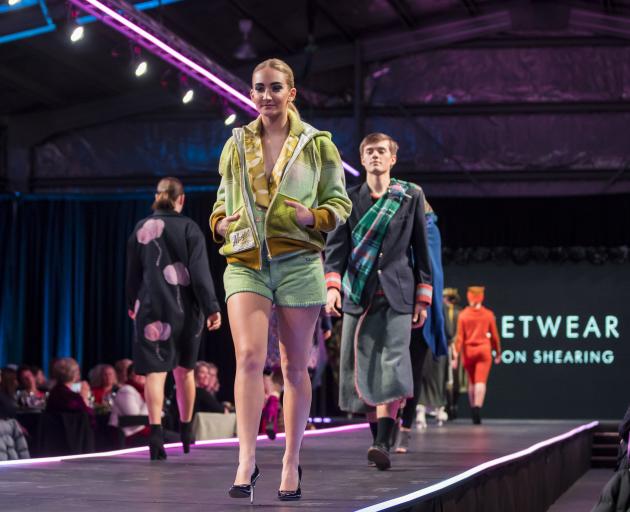 Models walk in woollen outfits at the WoolOn creative Fashion event in 2018, when it last took place. PHOTO: JANYNE FLETCHER
An 11th-hour application for council funding was "make or break" for the WoolOn Creative Fashion Event, Central Otago District councillors heard on Wednesday.

The application for $10,000 from the event’s organisers was debated at a full meeting of the district council in Alexandra on Wednesday with councillors conflicted as to whether to bail out the event or potentially let it sink.

The application was discussed two days before the event’s start tonight.

A report was presented to the council by Tourism Central Otago general manager Dylan Rushbrook, who admitted there were "probably more reasons to decline" the funding than grant it.

Reasons to support the event included its "huge potential", he said.

Last year, the council agreed to fund $15,000 from reserves but the event was cancelled as a result of Covid-19 and the grant was rescinded.

The council introduced a new grants policy last year and a bridging grant programme was set up through the transition to a contestable grant process.

In July the council became aware the event was facing financial difficulties and, despite missed deadlines, it was agreed a grant should be considered given the event’s potential to be a signature event for Central Otago.

Staff advised WoolOn organsiers an urgent application could be considered at Wednesday’s meeting and were told to apply no later than July 27 to allow a report to be prepared but an application was not received until 8.14pm on August 1.

Other factors included, no specific budgeted promotion grant money available, unfairness to other applicants for grants made outside the contestable process, and the application did not follow the correct process as the applicant was requesting the council provide funding towards a projected budget shortfall and it was not tagged to a specific component of the event.

The applicant was effectively requesting the council to underwrite the 2021 event but the council did not financially underwrite projects, the report said.

Cr Stu Duncan said he had been impressed by the event in the past, applauded its support of the wool industry and it was a shame it had suffered so many "hiccups".

Cr Tamah Alley said she was disappointed the application’s lack of detail but if the event could return to the high standard of the past she supported it.

Cr Martin McPherson said the application "very poor" and to grant it risked setting a precedent.

Cr Cheryl Laws said there was something wrong in an event running since 2004 that was still not in a good financial position.

Cr Neil Gillespie said the grant fitted the matrix the council applied to grants given better than some other applicants where a grant was approved for a greater sum.

The grant was narrowly approved from district general reserves with Crs McKinlay, McPherson, Tracy Paterson and Ian Cooney voting against.