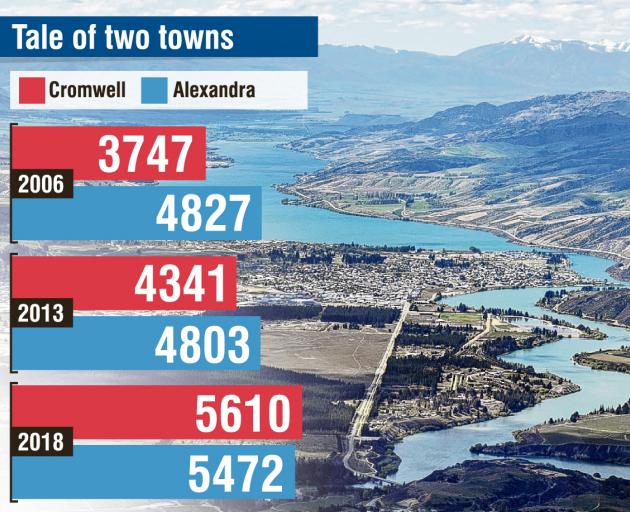 The difference is only 138 people.

But it has put Cromwell into the record books in Central Otago, the town finally confirmed as being bigger than Alexandra for the first time by Statistics New Zealand.

Central Otago Mayor Tim Cadogan said he had recently noticed the milestone, which was not officially released by Statistics New Zealand, but able to be viewed when ‘‘drilling down into the detail’’ of the latest census figures.

But the district’s Mayor, Tim Cadogan, and deputy mayor, Neil Gillespie, who live in Clyde and Cromwell respectively, say the figures should be no surprise and "don’t really matter".

"It just confirms the growth we’ve been having in Cromwell. Alexandra is still growing, just not at the same rate as Cromwell."

The figures were a reminder of the need for good planning in Central Otago.

Cromwell’s recent 30-year master plan process had given town leaders and residents a "good handle on where the growth is going", and master plans would now be done by the Central Otago District Council for Alexandra and Clyde as well, Mr Gillespie said.

Mr Cadogan said there were "30 very good reasons Cromwell is growing faster than Alexandra — the 30km it is closer to Queenstown and Wanaka than Alexandra".

But the "biggest story" was the census figures showed Central Otago was one of the areas in the country with significant growth in younger age groups.

This debunked the myth that ‘‘only older people’’ were moving to the district, and had further boosted growth.

"And there’s only one thing that’s certain," Mr Gillespie said.

"The growth isn’t over yet."