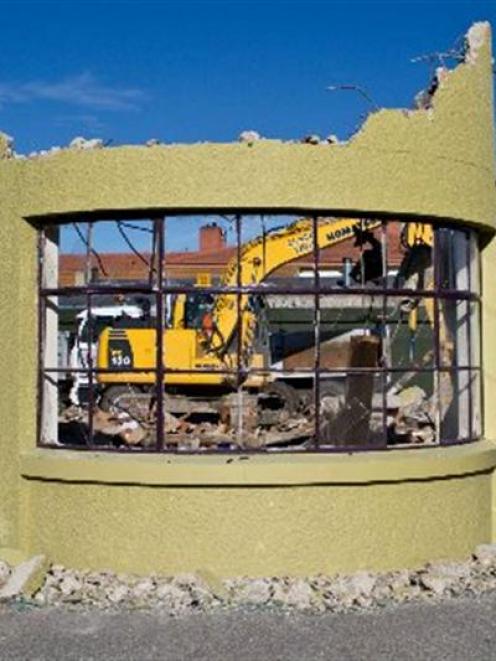 Rural Art Deco Maniototo wanted the curved facade of the building to be retained and incorporated into a commercial venture but the group had exhausted all the options it had for saving what was left of the building, chairwoman Diane Paterson said yesterday.

"We definitely feel we gave it our best shot and tried all we could but we just weren't able to pull it off."

"The loss of the building is disappointing for art deco and for the town. It had a presence in the main street and had a positive effect on the ambience of the town. Ultimately, though, we realised it was up to the owners of the building to make the decision on what happened to it," Ms Paterson said.

Dick and Janet Parker own the 1950s Ranfurly Auto building, which was extensively damaged by fire on March 8 last year.

Mrs Parker said the building was falling into disrepair and the decision to demolish was partly for safety reasons.

The property had been for sale for a while and the cleared section would remain on the market.

"We've been working in with the art deco group every step of the way but they ran out of options to raise the money.

Fundraising will be even more difficult since the Christchurch earthquake and it was going to be a big undertaking, to take the building on, even with the community on their side."

With a higher than usual rainfall during the past year, the remnants of the building had deteriorated and a section of the veranda had already fallen off, she said.

"It was a shame to demolish the building but if we'd had a ripper of an earthquake, like Christchurch, you wouldn't have wanted to be near it," Mrs Parker said.