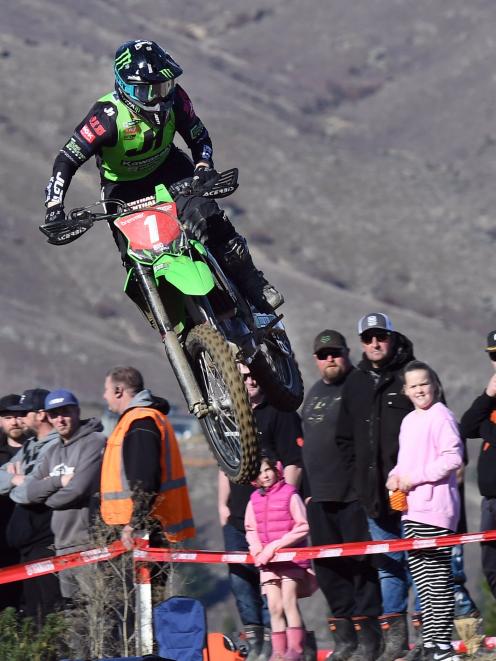 Dunedin’s Courtney Duncan showed the crowd how she came to be the fastest female motocross rider in the world, comfortably winning all four races at the King of Central motocross event in Cromwell yesterday. PHOTOS: STEPHEN JAQUIERY
She blitzed the women’s field over two races, winning each by a lap, in the King of Central event. Then she went out and obliterated the MX2 men, leaving her opposition in her Kawasaki KX250’s roost in both races. Despite downing her bike briefly in the first race, she chased Otautau’s Jack Treloar hard, passing him and putting nearly 10 seconds on him by the end of seven laps. He was also the runner-up in the second race, finishing 17.9 seconds behind Duncan.

Central Otago Motorcycle Club hosted the event. President Blake McPhee, of Cromwell, was "stoked” with the about 240 entries and having Duncan as a drawcard.

She certainly gave the crowd plenty to cheer about as they moved from one side of the track’s viewpoint to the other, every time she raced on by, or soared over the jumps.

"There are some guys in the MX2 class who are pretty fast and she was way ahead of them,” McPhee said.

For Dunedin’s Duncan, racing on home soil for the first time in three years was not all about the glory. Competing in front of a large contingent of family, who had travelled from throughout Otago and fans from all around the mainland, she was high on the adrenaline that only race pace can induce.

"I just want to keep racing now,” an elated Duncan (24) said, beaming after her final bout in the accident-shortened programme. 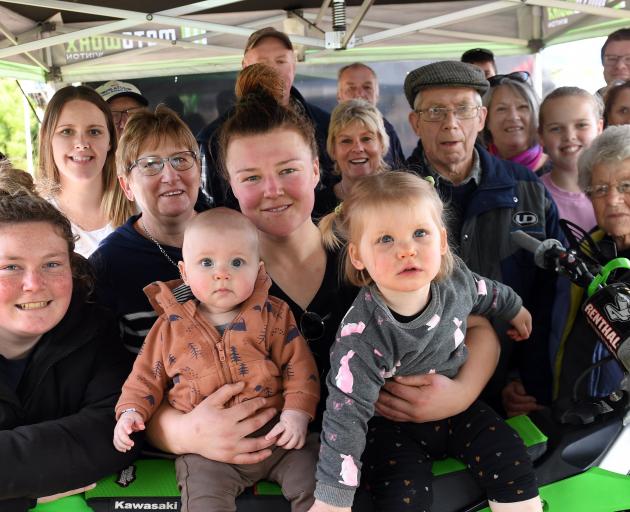 Women’s World Motocross Champion Courtney Duncan had a big turnout of relatives watching her race yesterday, including (from front left) her sister Amy Turner, second cousins Luke (6 months) and Maddie McCaw (19 months) and grandparents Brian and Denise Phillips.
She will have to wait for just over a month until she foots it with the world’s fastest women again, when the global motocross series resumes in Turkey on September 6. Getting some gate drops yesterday, should help her maintain the five-point lead she held before the Covid-19 enforced break, she said.

"The main goal was to focus on riding and learn. It was good to get that racing intensity and be put under pressure and make some smart decisions. It was cool to get this one race meeting in and with a couple more weeks under my belt, hopefully win the [WMX] title.’’

Motoworx Winton Kawasaki sales manager Justin Shaw, who supplies Duncan’s bikes on behalf of the national distributor while she is in New Zealand, enjoyed seeing the girl he has been watching race "since she was a wee dot” in awe-inspiring action.

"It’s not very often you get a world champion in your midst,” he said.