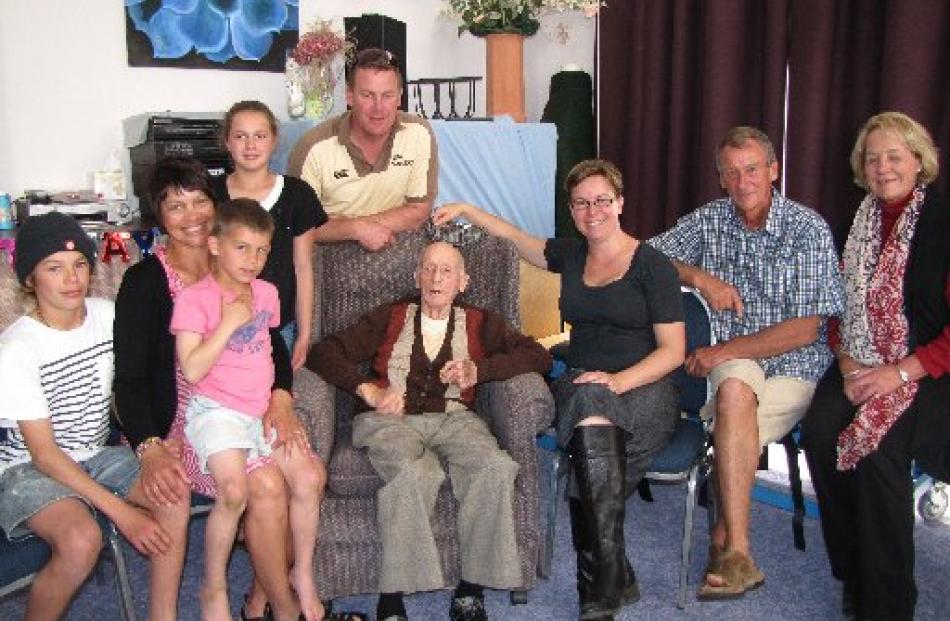 Norman Pledger (centre) celebrates his 101st birthday in Cromwell yesterday surrounded by (from left) Tom (13), Jo, Dylan (6), Sophie (11) and Craig Pledger, all of Dunedin, Vrena Joyce, of Hamilton, and Colin and Helen Pledger, both of Tarras. Photo:...

He freely admits his sight and memory is going but "these things happen" after using them for more than a century.

Norman Pledger, of Cromwell, celebrated his 101st birthday at Ripponburn Hospital and Home yesterday with a special afternoon tea, surrounded by family.

He credits his longevity to "no smoking . . . and plenty of exercise" though admits "when I was young, maybe 5 or 6, I used to go and find the dry leaves, roll them between my hands then roll them into a smoke".

He had five siblings who took up smoking on a more permanent basis.

He was born in Dunedin and lived most of his life there and in Waitati - "the first stop over the hill".

"I played some football there and became a pretty good runner."

When asked what kind of running he did Mr Pledger smiled and said: "You know, the kind with two legs".

"I got third and had cramp almost the whole way.

"I also raced against the New Zealand champion in the three-quarter mile and I beat him but then when the good prizes were up for grabs he beat me by five inches."

But an injury to his right leg during a football game meant he had to give up running professionally.

"I wish I never went with those fellas [the footballers], at the rate I was bringing in money I would have been a rich man but that put a stop to that.

"I still walk a lot, but not so good anymore ... keeps me fit for whatever comes."

Up until about eight years ago he used to walk up Flagstaff hill in Dunedin.

He eventually went on to work at Seacliff Hospital.

He then caught tuberculosis and did not work for quite some time.

In the late 50s he took a position as caretaker for Waitati School.

During the 50s he also built a home in Waitati for wife Nancy and sons Colin and Bruce.

He lived there until 1982 when he moved back into Dunedin, then, in 2007, he moved to Ripponburn to be closer to Colin.

Colin said his father had a "have a go at everything" attitude which had been passed on to the children, grandchildren and great-grandchildren.