Everything 'moving towards that hole' 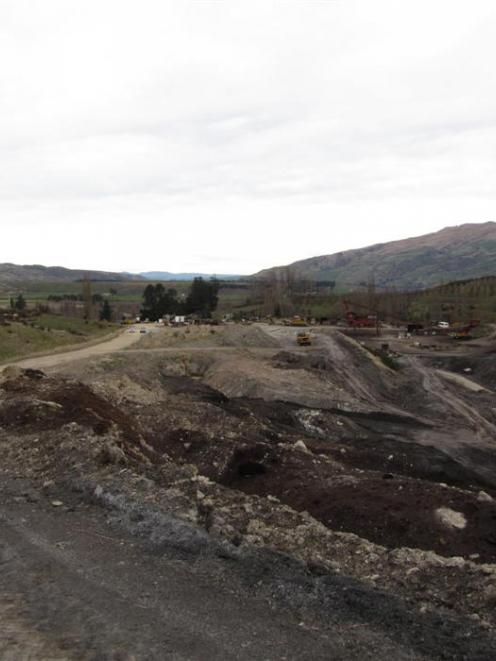 Central Otago District Council infrastructure services manager Jon Kingsford with the realigned, one-lane Coal Creek Rd. The original alignment and the road reserve is now in the coal pit. Photo by Sarah Marquet.
Houses are moving, cracks are appearing in the ground and a road has fallen into the coal mine at Coal Creek near Roxburgh.

''It's caused by digging that bloody great wonking hole down there,'' landowner Neville Gunn said of a neighbouring century-old opencast coal mine.

''All the country around here is moving towards that hole.''

While he and his neighbours say the coal mine, operated by Harliwich Holdings Ltd, is causing the destabilisation, mine owner Ken Harliwich said the land was unstable before his family started their operation about a century ago.

He admitted the six houses in the area were moving, and estimated it to be at a rate of 15cm per year, but blamed the underlying geology - ''greasy clay'' slipping on the coal seam.

Central Otago District Council infrastructure services manager Jon Kingsford agreed there was ''pretty complex geology'' and ''weak soils'' in the area, but said it seemed mining operations were the cause of the slip that claimed the road.

Coal Creek Rd, a loop road, had slowly been succumbing to the coal pit over the years but bad weather this winter and last had sped up the process and now the original public road was lost.

Mr Kingsford said the council had warned Mr Harliwich about getting too close to the road. But Mr Harliwich could not remember any such warnings.

For the most recent slip, Mr Harliwich said a ''slab'' of coal fell off and undermined the road.

Asked if he thought he was mining too close to the road, he said it was his land and he had a licence to mine ''but I suppose we were close enough to the road''.

Though officially closed, there is a one-lane track built on road reserve but it too is potentially unstable.

The road was also closed a year ago, but residents lobbied the council to let them use the track, though the school bus could not use it; neither could stock trucks.

About two months ago, when the latest slip occurred, the road was officially closed again.

Mike Grice, whose house is about 60m away from the edge of the pit, said he had witnessed many small slips on the hill overlooking the pit in the past 18 months, and each time Harliwich machinery was sent up to patch it up.

''But every time they do that, they pinch a bit of the hill. How many times can they do that before the hill disappears?''

He and his wife, Terri, do not use the closed section of road. Instead, they collectively travel an extra 24km a week to get to work and back.

Farmer Ray Gunn uses it at least twice a day though. He has to in order to get from one side of his farm to the other.

The council, the residents and Mr Harliwich all agree a road has to be reinstated and that Mr Harliwich should bear the cost but as yet, no agreement had been made as to where that road will go. The three parties are awaiting an overdue geotechnical report.

Mr Harliwich said he wanted the road to be ''pushed back'' - he owned land on the other side of where the road was now and intended to mine it.

Once he had finished mining, he would backfill the land and return the road to its original position, he said.

He estimated there was another one or two hundred years' worth of coal in the hillside, though his licence would run out in 40 years.

It is not just the road locals are concerned about - it is the stability of their land.

Mr and Mrs Grice bought their house in 2007 and had done some renovations but now wondered whether it was worth it.

For Mr Grice and his neighbours, the mine and the problems they were facing were ''a bit like a double-edged sword. It's a business down there - it's our mates, workmates and neighbours down there,'' he said.

Mr Kingsford said, ideally, the road would be fixed by next winter but nothing could be decided before the geotechnical report was received.