Ferreting out rabbits seen as a ‘win-win’ 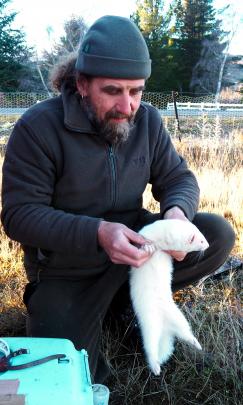 Wanaka rabbiter Steve Barton handles one of the ferrets he uses for rabbiting in the Cromwell Chafer Beetle Nature Reserve. Photos: Ellen Rykers. 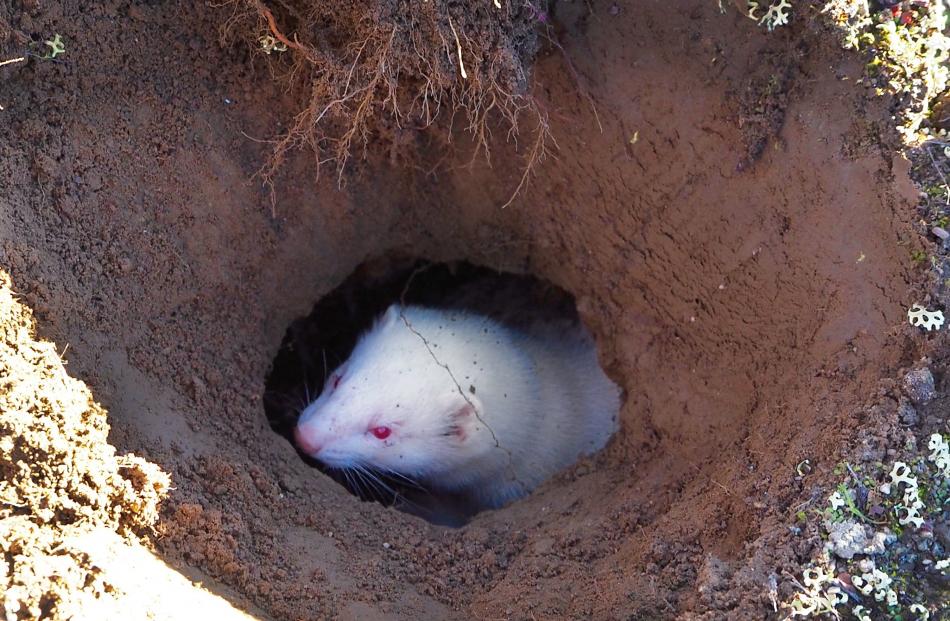 A ferret digs into a rabbit hole at the Cromwell Chafer Beetle Nature Reserve. 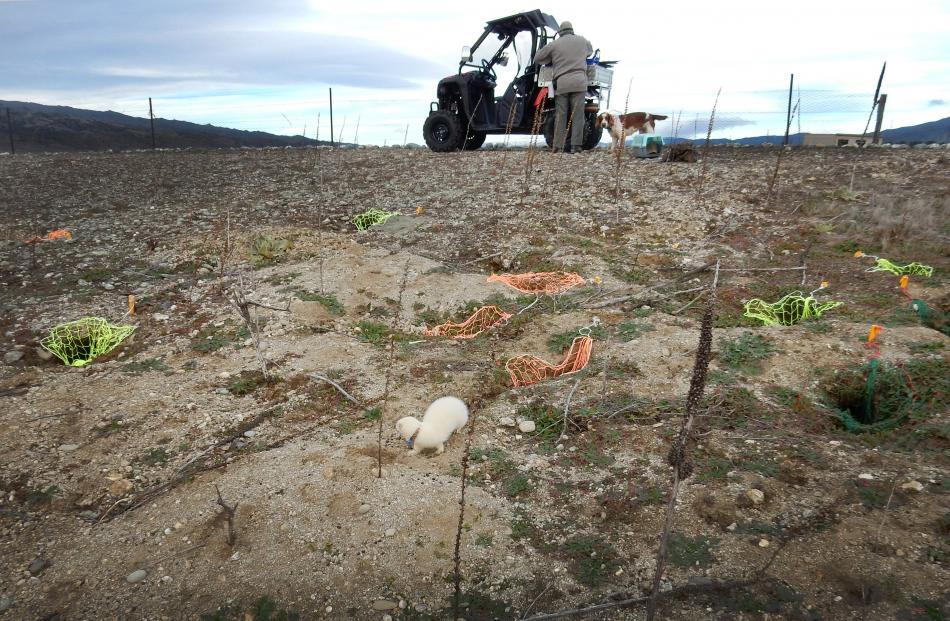 A medieval method of pest control is helping an endangered species at a Central Otago reserve. Pam Jones finds out how ferreting is tackling both rabbits and redbacks in the fight to protect the Cromwell chafer beetle.

It is an ancient and environmentally friendly practice that is getting results in a protected Central Otago landscape. But it will also get you bitten occasionally.

"Ferrets here have to be trapped from the wild and tamed down by handling lots. The younger they are when trapped the easier to train — in general. But I have had many a sore finger from unsuitable ferrets that cannot be tamed down."

Steve "Billy" Barton is talking about rabbiting, done an old-fashioned away. Ferrets have been used to catch and kill rabbits and hares since before medieval times, and in Central Otago they have been used for pest control on and off for decades.

The technique is perfect for areas where shooting or poisoning is difficult to do, and that is why it is being used in the Department of Conservation’s (Doc) Cromwell Chafer Beetle Nature Reserve, Mr Barton, a Wanaka-based rabbiter, says.

Alexandra Doc staff came up with the idea three years ago, wondering if it would provide another option for pest control in the area, Mr Barton said.

"The chafer beetle and Mahaka Katia [in Pisa Flats] reserves are difficult to shoot [in] safely at night and, being popular reserves with the public, poison was not going to be a favoured approach."

So a trial using ferrets was done in the chafer beetle reserve, between Cromwell and Bannockburn, three years ago. About 50 rabbits were killed in two days. The next year a formal programme began, during which  176 rabbits were killed. 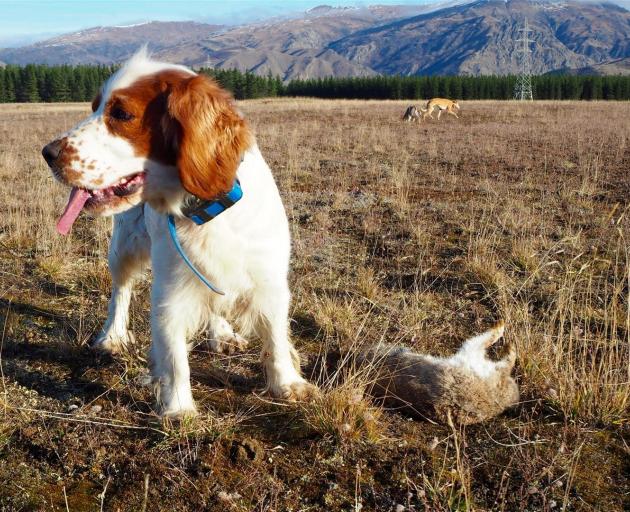 The use of ferrets is strictly monitored by the Ministry for Primary Industries (MPI). A maximum of three ferrets is allowed to be kept, and the ferrets must not be bred, sold, passed on to other people or shown at events.

He uses ferret location devices on all his ferrets, which allows them to be found when they are  almost 5m underground.

Dogs are the other partner in the operation. This is how it works. —

"The dogs find the rabbits in their burrows (not all burrows are occupied) and indicate the rabbits by sniffing or staring at the holes, then we set a net over the holes, pop the ferret in and wait for the rabbits to ‘bolt’ to escape the ferrets into the nets. If a rabbit manages to wriggle out of a net the dogs are there to catch it and retrieve it to me.

Sometimes a long net is used on large rabbit warrens (Mr Barton says there is one with more than 100 holes at the chafer beetle reserve) and, both in and out of the nets, the rabbits are sometimes finally "dispatched" by Mr Barton.

But he reminds people the practice is far more natural and preferable to poisoning. The reality is rabbits continue to be a severe pest in Central Otago and need culling. Using ferrets and dogs is an environmentally friendly approach, he says.

It is also helping the endangered redback spider.

In the chafer beetle reserve, the spiders have set up camp in old rabbit burrows and have been eating the chafer beetles. Doc has been monitoring redback numbers there and also has a programme to fill in old burrows, which seems to be helping control spider distribution — when rabbit holes were filled, redbacks did not re-establish in a defined 5m area in all test plots.

Mr Barton says ferreting is a "win-win" in terms of using pests to control other pests.

"I am using a pest (ferrets) to remove a pest (rabbits) to help control a pest (redbacks) to improve the chance of the chafer beetle survival."

In the meantime, Mr Barton is training more dogs to use for ferreting, and catching ferrets as required. Taming them is a gradual process, done simply by handling them and feeding them by hand.

"The more you pick them up and handle them the tamer they get — out in the field they sometimes come back to you to pick them up. Occasionally you’ll still get a little nip from one of them, usually when you’re retrieving them from a hole, like a magician. But they’re pretty good. It’s no problem."

Doc Alexandra senior ranger biodiversity John Keene said Doc planned to continue the use of ferrets in the Cromwell reserve, and praised the technique as "another tool in the toolbox" in the fight against rabbits.