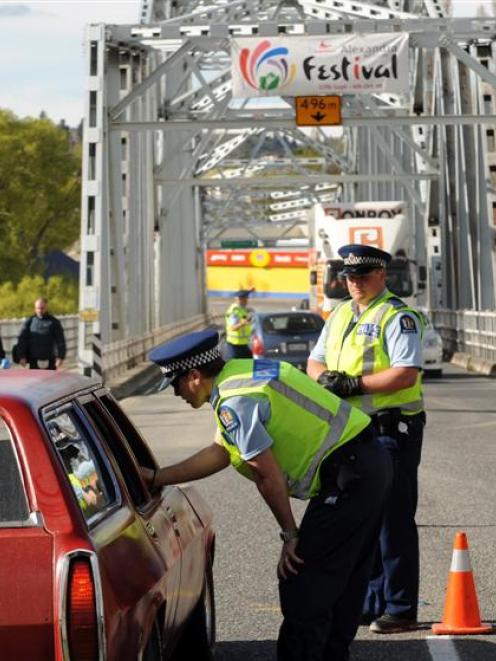 A carload of youths is pulled over at a police alcohol checkpoint in Alexandra during the 2008 Blossom Festival. Photo by Stephen Jaquiery.
In one of its shortest meetings to date the Central Otago District Council imposed a special liquor ban to cover the forthcoming Alexandra Blossom Festival.

Councillors took only nine minutes this week to discuss and sign off the temporary ban, which includes increased police powers allowing them to immediately search containers and vehicles.

It is identical to last year's ban which, for the first time, included the areas of Bridge Hill and Graveyard Gully Rd in order to align this ban with the permanent liquor ban under which people cannot drink or possess alcohol in public places within Alexandra and Clyde from 10pm until 7am the following day, Thursday to Sunday.

Exceptions are made for people taking unopened alcohol to BYO restaurants or private premises within the ban area.

The Blossom Festival liquor ban also includes the public spaces of Cromwell and will be in place from 7pm on Thursday September 26 until 1am on Monday, September 30.

Council planning and environment manager Louise van der Voort said a ban had been imposed to cover the main festival period every year since 2004 and was supported by police.

Meetings with police, event organisers and council staff after previous Blossom Festivals ''revealed that the liquor ban was successful in reducing alcohol-related problems in the areas of the bans'', she said in her report to the council.

''Disorderly behaviour and criminal offences linked to consumption of alcohol in public places may spoil the Blossom Festival by having a detrimental impact on the social, cultural, economic and environmental wellbeing of visitors and residents,'' she said.

A special liquor licence held by event organisers will allow festival-goers to drink within a designated area of Alexandra's Pioneer Park on Saturday, September 28, the main day of the festival.

The festival runs from September 27 to 30.