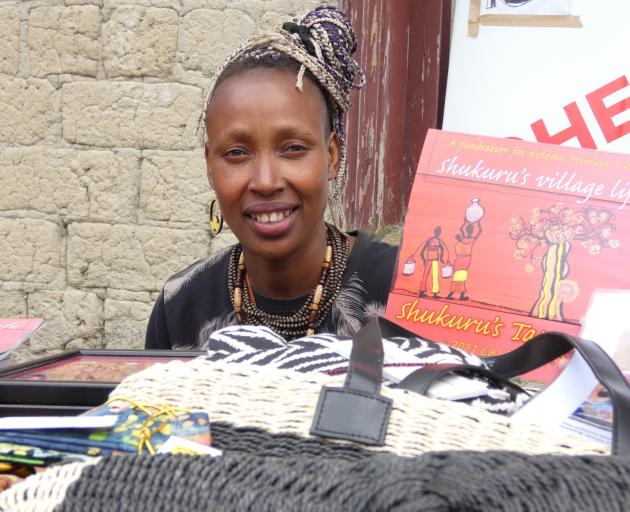 Shukuru Munro displays her range of Tanzanian goods at the St Bathans Fete. All money she raises goes back to her former school in Tanzania. PHOTO: JARED MORGAN
It took almost 20 years for Shukuru Munro to give back to her alma mater in Tanzania and she is doing it one fete at a time.

The Broad Bay woman was one of about 30 stallholders at the annual St Bathans Fete yesterday, which acts as the finale to the two-day St Bathans Rhythm and Gold Festival.

Mrs Munro attended Kelema Balai School in the Dodoma region of Tanzania and it was her last visit home in 2018 that spurred her into action.

"This is a school of 1000 children aged 5 to 15 years. I saw the school needed help — the toilet block had collapsed.

The differences between schools in New Zealand and her home country were stark, she said.

Among her wares were her paintings of village life she created from childhood memories, as well as Tanzanian traditional goods.

The festival, which celebrates St Bathans’ goldmining heritage, typically causes the township’s static population of eight to swell to 500 and this year proved no different, despite a dearth of international tourists due to Covid-19 border closures.

St Bathans Community Association secretary Helena Raymond said while the Vulcan Hotel was undoubtedly St Bathans’ biggest drawcard, the festival was also an opportunity to show it was more than "just a pub and a ghost".

The number of visitors was a chance to see just how much the town had hummed in its gold rush heyday.

Support for Rhythm and Gold had come from various sponsors and she made special mention of Central Sound Hire and BDL productions, who made headline act DJ Benthamism’s set on Saturday a success.

Volunteers had also come from far and wide, with some coming to St Bathans fresh from stints at Rhythm and Vines near Wanaka, Ms Raymond said.

Overall she said the event was a success.

"We’ve had really good feedback from the public and we had no problems."