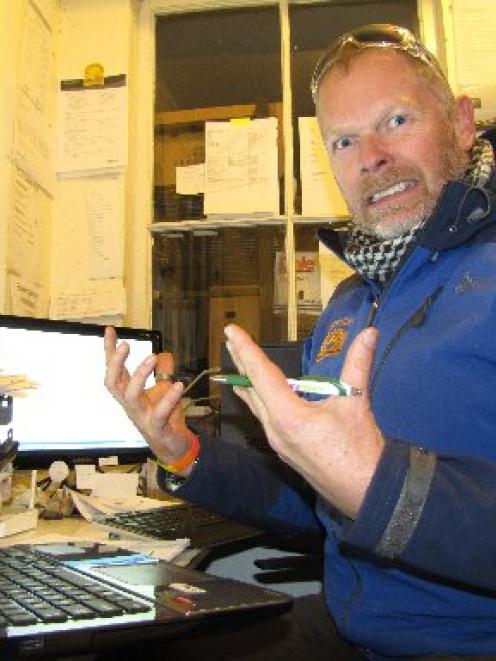 Cromwell businessman Bob Tovey says internet connectivity problems are stifling his business. Photo by Sarah Marquet.
Within the next few years, Central Otago is going to have pretty good internet thanks to the Government's Rural Broadband Initiative, but for now there are some people who can't connect, some who say slow speeds are stifling their business and some who have had to develop their own solutions to gain connectivity. Reporter Sarah Marquet talks to some of those people.

Cromwell businessman Bob Tovey is paying for a service he is not getting, at least not reliably.

For up to a year, he has been battling with his telco to get the internet service he is paying big bucks for.

Often, he spends more time on the phone with the company or waiting for things to load than doing actual work and says it is stifling his business.

''No banking, no internet, no emails, my GST is due today!!!!! STRESS is not the word for it!!!!! SOMETHING IS WRONG!!!!!!!!!! IT NEEDS TO BE FIXED,'' is just one message he recorded in a file which contains many screen shots of download error messages and speed tests showing internet speeds so slow they register as zero despite a live connection.

''I will come back [to work] late tonight or early in the morning I am SOOOOOOOOOOOO frustrated,'' was another.

Sometimes, online jobs that should only take five minutes take up to an hour or he has to wait and try again outside of peak traffic hours, after 8pm or before 8.30am for example.

It has got so much worse in the last three months, he says, he feels sick when thinking about going into the office.

But he does have a connection.

There were a few hundred people nationwide on a waitlist to be connected to the internet, Chorus media relations manager Elissa Downey said.

Just over 50 of them are in Otago.

Grant Finn, also of Cromwell, was one of those people.

He now has an internet connection but had to wait four frustrating months until a port became available - until someone else gave up their connection.

For those four months, he had to use a ''very slow and very expensive'' mobile broadband stick.

He was living in a relatively new area in Cromwell that had been built up over the past five to 10 years but said the roadside cabinet containing the necessary infrastructure for internet had not been upgraded to cope with the demand.

Telecommunications infrastructure, including 50-plus-year-old copper wires, is stretched to capacity throughout the country.

Miss Downey said in some places, it was just too expensive to upgrade.

''The significant additional investment costs involved in deploying new broadband infrastructure to some harder-to-reach areas, or areas with a small number of waiters, makes the economics very challenging.''

''It's just one of the things we've got to have, like power, water and good roads.''

He has been working with representatives from Otago's five other councils to produce the Otago Digital Strategy.

To develop the strategy, 2135 people and 650 business owners or managers were surveyed.

Findings included: at least 12% of people in Otago cannot access the internet; compared with other countries, New Zealand has slow, poor-quality internet; rural isolation could be reduced by better internet access, and there is an increasing expectation that people should have access to cheaper internet and/or free internet in public spaces.

The Government's roll-out of ultrafast broadband is expected to rectify some of this.

Urban Dunedin, Queenstown, Oamaru and some parts of Wanaka have or are to get the ultrafast internet, delivered via fibreoptic cables to the door. People in other areas of Otago will be on the rural broadband scheme.

Except for schools and hospitals, people will not get the cables to the door. Instead, the cables are being laid and connected to cellphone towers.

People will be able to access the internet wirelessly or through improved copper wiring.

Once the two schemes are completed, between 2016 and 2019, 75% of people will have access to ultrafast broadband and the number of rural homes able to access it will increase from 20% to 86%.

That would still leave 2.2% of the population unable to access faster broadband but Chorus was working on a solution for that, Miss Downey said.

It would involve satellites but there was no further information at this stage, she said.

Mr Hawker said, in the meantime, while internet connectivity was not council business, he could help facilitate resolutions in some cases.

One solution
An Earnscleugh man, who wished not to be named, has found a solution to his internet woes.

He lives 2.1km away from a recently upgraded roadside cabinet but could not hook into the new technology. Only those within 900m of the cabinet could get the faster internet.

He runs his own business and has about 17 computers, though not all run at the same time. The network capacity was such that there were times when he could not connect another computer if there was already one online or if he did, someone else was kicked off.

He could not even use computer programs that required the internet, such as Skype.

Now, he has internet speeds about 10 times faster than he was once getting.

He knew someone who lived within the 900m radius and was able to install a transmitter on their property. The signal is then beamed to a repeater station on a hill block which he owns and then bounced to his house.

The technology only works in line-of-sight, hence the repeater station, but can beam the internet signal up to 40km.

He said the technology is commonly used around the world and has now become cheap enough to be a viable solution for New Zealanders.