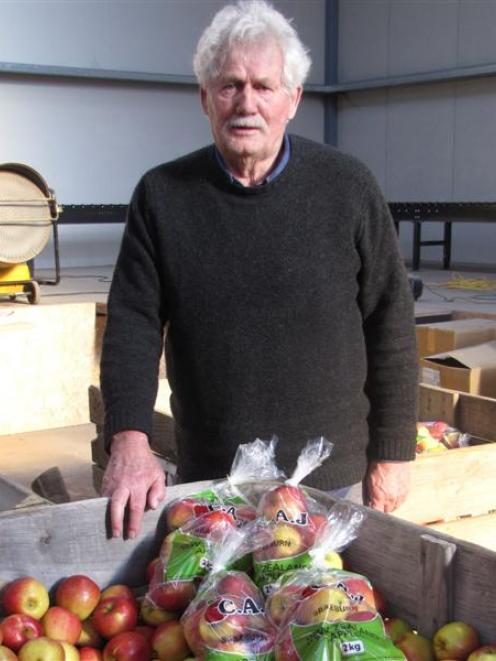 "It is exciting that Central Otago apples could be in Australia next season, but a lot of apple growers' returns have been adversely affected by the [high] New Zealand dollar," Pipfruit New Zealand director and Ettrick apple grower Stephen Darling said.

"Although sellers get good prices, the high dollar is reducing the returns for growers to unacceptable levels. It is irresponsible for the Government not to be considering how they can change that effect."

Con van der Voort, one of Central Otago's biggest growers, said quality and quantity wise this season had been very good and he had lifted production by 25% but would be worse off because of the high dollar.

"The whole apple industry, as well as the wine, fish and kiwifruit industries, is in dire straits because the Government is sitting on their hands and are not prepared to do anything to get the currency down. The National Government will go down in history as ruining these industries."

He said growers had lost between $5 and $6 a carton, because of exchange rates.

Ministry of Agriculture and Forestry senior policy analyst Annette Carey said exporters were unable to raise prices high enough to compensate because of competing supplies overseas and options for consumers.

A spokesman for the Minister of Finance, Bill English, said the dollar was higher than the Government would expect at this point in the economic cycle "and we appreciate this is a headwind for exporters".

"The most effective thing the Government can do is contain its own spending so it does not add to inflation pressures, which push up our interest rates and dollar."

Bank of New Zealand economist Doug Steel said any option to devalue the kiwi would raise input costs. While growers would get more for their apples, they would also have to pay more for the likes of fuel.

"There is no silver bullet" to the problem, he said, because while the dollar is "a pain for some, it is good for others".

"We don't want to aspire to have an economy like the United States, which is constantly under pressure to devalue its dollar."

A recent MAF report said morale in the industry was low and many pipfruit growers suffered a financial loss in 2010 as a result of bad weather and low returns in Europe.

"Despite most markets performing well this year, the high New Zealand dollar will erode export returns resulting in poor financial outcomes again for many growers in 2011."