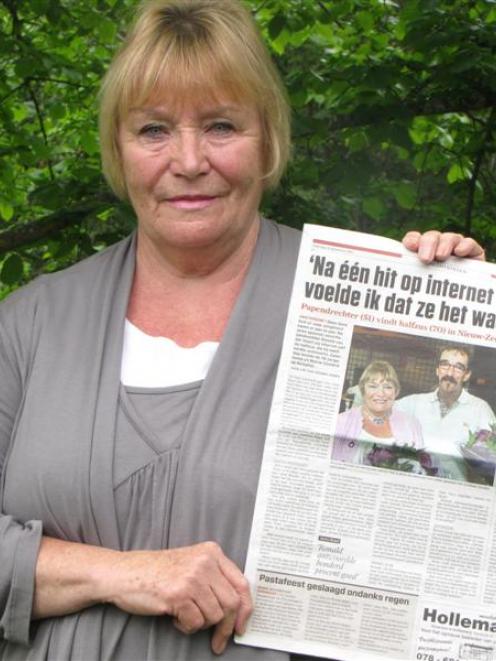 Anna Skeet, of Alexandra, holds a Dutch newspaper containing a photo of her and new-found half-brother Ronald Staps, whom she met recently in the Netherlands. Photo by Sarah Marquet.
On her 70th birthday, Anna Skeet, of Alexandra, got a present like no other - contact with family she didn't know she had and who had been searching for her for more than 30 years.

On June 11 this year she opened her email and noticed a message in her spam box.

"I opened it and saw my full birth name, my mother's name and my father's name ... it was a message from heritage.com.

She replied to the email, asking for a phone number.

"When I got the person on the line I asked 'Which town did Franz [her birth father] live in, where did he work, did he have any siblings... when the person answered all correct, I said 'Bingo, you won the prize'."

That person turned out to be her half-brother, Ronald Staps, who had been searching for her for 30 years. She found out she also had another half-brother and two half-sisters as well as nieces and nephews.

"I don't know if it was fate or what... I had always wanted a brother or sister but was an only child."

Though she did not know about her half-siblings, she knew the man she grew up with was not her birth father. When she was almost 16 Mrs Skeet, then Anna Steinmann, of Germany, applied for a passport so she could visit cousins in England. She was told she could not get a German passport and her mother said "Oh, you may need to go to the Dutch consulate".

It was then that she found about her birth father. She was born in Germany in 1941 to Anna Juliana Baum, of Germany and Cornelius Franziskus Staps, of the Netherlands and her father left Germany when the army tried to enlist him.

"They split up when I was just a few months old and by 1945 my mother had married a German." The family adopted his surname, Steinmann.

She found out from Ronald their father returned to Germany to find her but as her mother had married, changed their name to Steinmann and moved to a different town, he couldn't track her down.

In 1972, on his deathbed, he asked Ronald, then 13, to keep looking for her. Thirty years ago, when he was 20, Ronald began searching and came up with the surname Steinmann.

When she was 18, Anna went to England, fell in love with a man called Brian Skeet and in 1962 immigrated to New Zealand, where they were married six months later. They lived in Dunedin and Tarras before settling in Alexandra.

Following their phone conversation this year, Mrs Skeet and Ronald immediately started communicating via Skype and in September she flew to Europe to meet that part of her family.

Mrs Skeet said she took a couple of weeks to settle in with her rediscovered family but was amazed at how similar they were to her in terms of personality, gestures and other traits.

She recently returned from the trip and hopes her new-found family will visit her here before too long.