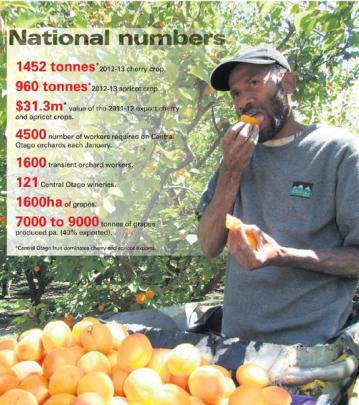 A lack of seasonal staff is adding to the pressures Central Otago fruit growers face from the weather and also hampering industry growth.

Workers to harvest the area's main crops of cherries, apricots, apples and grapes were scarce this past season and that could be worse for the coming season, growers say.

If had not been able to access 50 Vanuatuans from Blenheim at the last minute through Seasonal Solutions, he would have been in dire straits, Central Otago Winegrowers Association president James Dicey said.

Central Otago had enough trees planted to double its cherry exports and although bad weather consistently hampered crop size, even with a perfect growing season, lack of staff for harvesting would mean fruit would get wasted, Summerfruit New Zealand chairman and Roxburgh grower Gary Bennetts said.

Pipfruit New Zealand director and Teviot grower Stephen Darling agreed and said Central Otago apple crops were expected to increase significantly in the next two to three years but the success of that was ''critically dependent'' on enough staff to harvest the fruit.

Mr Bennetts said the number of permanent positions the industry could provide was directly linked to the number of casual workers they could get.

''To progress and go forward, we need an adequate casual staff base. We can't grow our permanent staff base without growing our business and to grow the business, we need more casual staff.

Seasonal Solutions manager Craig Howard said in January, at the peak of the horticulture and viticulture seasons, Central Otago needed about 4500 workers.

''If you think about the towns of Alexandra, Roxburgh and Cromwell, there's probably only 12,000 people between them and most of them are retired, so these people need to come from somewhere.''

He said, traditionally, 35% of that gap was filled by backpackers but there had been a significant downturn in numbers in recent years.

''Things like the Christchurch rebuild is pulling them there.''

It was not only a Central Otago problem.

Growers throughout the South Island were feeling the same pains, Mr Howard said.

''Overall, labour for the coming season is going to be a challenge.''

The Recognised Seasonal Employer (RSE) scheme, under which Pacific Islanders, particularly Vanuatuans, come to New Zealand to help with the harvest, was good at filling the gap, growers said, but the scheme needed to be expanded.

Mr Howard said a maximum of 8000 people could come to New Zealand under the scheme each year.