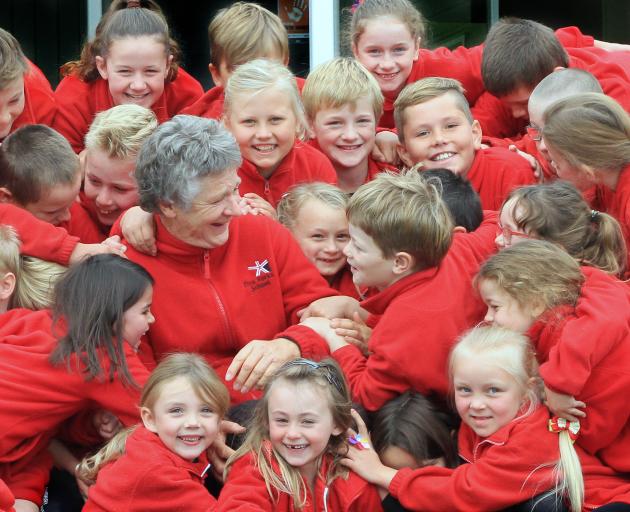 Five Forks School principal Cate Bole (65) is mobbed by pupils yesterday. Today she is retiring from the 32-pupil North Otago country school she started at as a secretary in 1990. PHOTO: HAMISH MACLEAN
Life as a principal in a small country school in North Otago means finding out where the children she knows have ended up, Cate Bole says.

"And that is really nice."

Today is her last day at the 32-pupil year 1 to year 8 Five Forks School. Mrs Bole (65) finished up "a month short" of teaching there for 25 years.

She has been the school's principal since 1998 but started in the office as a secretary in 1990, after moving to the area when the school needed help.

Already qualified as a teacher, Mrs Bole took on teaching duties in 1993.

Up until recently, she still taught the school's juniors, and had two days free to fulfil her duties as principal.

As mainly farming families attended the school, which is 25km inland from Oamaru, the children were all "great country kids".

And many of the scores of children who had been through the school during Mrs Bole's tenure had deep roots in the area - some pupils' great-grandfathers had also attended.

From day one there had been good community support - "just really good parents, really" - and a good team, Mrs Bole said.