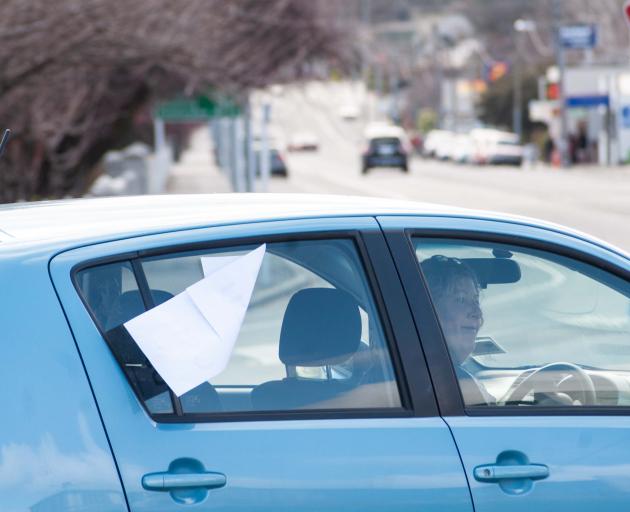 Alexandra woman Damianne Wells’ Groundswell NZ protest in the centre of Alexandra left people thinking it was an anti-mask and anti-vax protest. PHOTO: SHANNON THOMSON
The near quiet of Alexandra’s lockdown was shattered yesterday with the sound of one lone, mobile protester.

However the reason for her protest was not what you would expect, such as anti-lockdown.

Alexandra woman Damianne Wells parked her blue Daihatsu Sirion with signage which read ‘Can you hear us!!’ outside Unichem Alexandra Pharmacy on Centennial Ave at 12.30pm.

The pharmacy is open as an essential service and is operating as a vaccination centre.

The protest was not an anti-vaccination or anti-mask-wearing protest either, but in support of Groundswell NZ, following on from the Howl of a Protest last month.

The organisation was asking people to ‘‘toot’’ their support for farmers for two minutes every Friday afternoon for the next three weeks, before a larger nationwide protest in November.

Mrs Wells, who worked as an office administrator, said she had chosen the town monument for her protest as it was in the centre of town, and planned to continue for the next three weeks.

She had prepared her signage before the Alert Level 4 lockdown was announced so had added a note to it letting people know she was in a bubble and asking them to please not approach her vehicle.

People lined up outside the pharmacy were confused, believing the protest to be about Alert Level 4 lockdown restrictions, and one witness contacted the Otago Daily Times about an anti-mask protest.

Oh the rich landowners are still protesting for the right to destroy everyone's environment for their personal profit. Their sense of entitlement knows no bounds as they scream from the moral low ground that they occupy.
If you can't farm, without destroying the environment, then you should not have a farm.

Most can and do, you need better farming friends.
Enjoy eating all your own grown and proceeded food? Obviously you don't eat anything that needs a farmer.....

The fundamental reason for groundswell being formed was farmer opposition to legal requirements to move to sustainable methods. Using a simple process of logic it follows that those who support groundswell, and I accept they may be a minority of all farmers, don't use sustainable farming practices. This is further supported by routine testing of river water quality which clearly proves the damage farmers are causing.
Also, you need only look back to almost total farming opposition to riparian planting. Farmers had to be forced into participating and bribed with large subsidies and grants. Now they point to the massive positive impact this is having on water quality and claim it as their own.
Very few dairy or meat farmers supply crops to the NZ market. These are provided by specialist horticulturists direct to supermarkets and other traders. Increasing numbers of these growers are dropping out of the industry and greater quantities of fruit and vege are coming in from overseas, at cheaper prices than the NZ providers.
Also the diminishing number of NZ growers are turning toward sustainable practices, organics and the like as is shown by the growth in farmer markets.

I would have said what an embarrassment the tooter was for the organisers... especially under the Covid LOCKDOWN circumstances. Also anyway wonder if they are aware of the law around sounding vehicle horns?