That is the message from Clutha District Mayor Bryan Cadogan who will meet South Otago social services agencies this morning to discuss what steps could still be taken to save Roxburgh children's village.

Despite the facility for vulnerable children being officially closed by operator Stand Children's Services last Tuesday, Mr Cadogan said local stakeholders would not 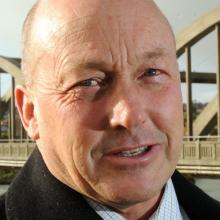 Bryan Cadogan.
give up trying to save the village until every avenue had been exhausted.

Assurances from Oranga Tamariki that other agencies would be ``picking up the slack'' caused by the closure did not stand up to closer inspection, he said.

That meant he and others protesting the closure had a ``moral responsibility'' to do whatever they could to help the area's ``most vulnerable'' children.

``Oranga Tamariki have said to us `there are 520 other agencies we fund around New Zealand who can pick up the slack with these kids.' We've talked to our local agencies and there are, in fact, four - none of whom have the capabilities to address the additional volume and type of caseload in the provenly effective ways Roxburgh has until now.''

He said Roxburgh village had provided short-term intervention care for about 220 children aged 5 to 12 last year, and an additional 85 were on waiting lists.

The facility was important because it offered a means for social service agencies to step into ``complex'' family situations before they escalated into longer-term issues for all concerned.

``With the loss of Roxburgh, our local agencies are saying they've lost their ability to save the day in many of these cases. Well, if Wellington isn't going to step up and take responsibility, we'll do it ourselves and stick up for our most vulnerable residents.''

A hui for lower South Island providers, expected to touch upon the Roxburgh closure, will be held in Balclutha on Friday.

I commented on this topic once before when I heard the decision to close the "camp" was made and worked out some very rough costs to have a child stay there for a day … the figures I came up with were somewhere around the $35k per DAY per CHILD. That’s from memory and only going by the costs published in the ODT article at the time.

It's only my opinion, but like a lot of "agencies", a lot of people are getting paid a lot of money to do a lot of nothing ... Open up the books for public scrutiny and let everyone have an opportunity to see exactly why the children missing out on the help they need and come up with possible solutions to the problem.

IF, and I do highlight the IF, I am even anywhere close to the ballpark cost wise, then somewhere along the line there are too many staff, too many staff being paid a lot more than they should be, or someone's ripping the system off ...

It’s only my opinion, but the people involved in the decision making process to close the camp, probably gave each other a big pat on the back, along with a nice big bonus, for the money they saved their mates ...