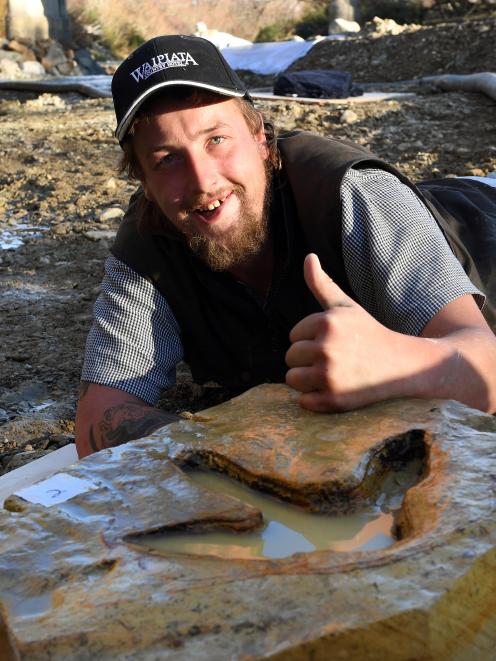 Michael Johnston with moa footprints he found in the Kyeburn River. Photo: Stephen Jaquiery
A Maniototo councillor is calling for a community feature to mark the region's moa footprint discovery earlier this year.

Ideas such as replica moa footprints and life-size sculpture have been mentioned as options.

Ranfurly man Michael Johnston stumbled across fossilised moa footprints dating back millions of years in the bed of the Kyeburn River in March.

Plans are now in development at Otago Museum as to how the footprints will be displayed.

Maniototo community leaders are discussing how the district can be acknowledged for the historical find.

Central Otago district councillor Stuart Duncan expressed his support for a project, saying the moa footprint sighting was significant for the region.

''I'd like to see something done. I've had a couple of discussions.''

''I'd ultimately like to see a concrete replica of those footprints ... .''

He said any project could be integrated as a key tourist attraction in Maniototo, including a kiosk near the Kyeburn area.

''People can find out a bit of history.

''If it happened in the middle of the North Island people, would be skiting about it.''

Mr Duncan also said it recognised how well maintained the water and rivers in the area were.

''We've got pretty pristine rivers and waters. If the footprints can sit there for a billion years, or however long, and they're still immaculately kept.''

Otago Museum director Dr Ian Griffin said there were plenty of opportunities to mark the discovery, including the idea of an annual Moa footprint arts festival.

''It's really up to the Central Otago community,'' he said.

''There are certainly lots of opportunities to use the footprints to inspire interest in this beautiful part of the world.''