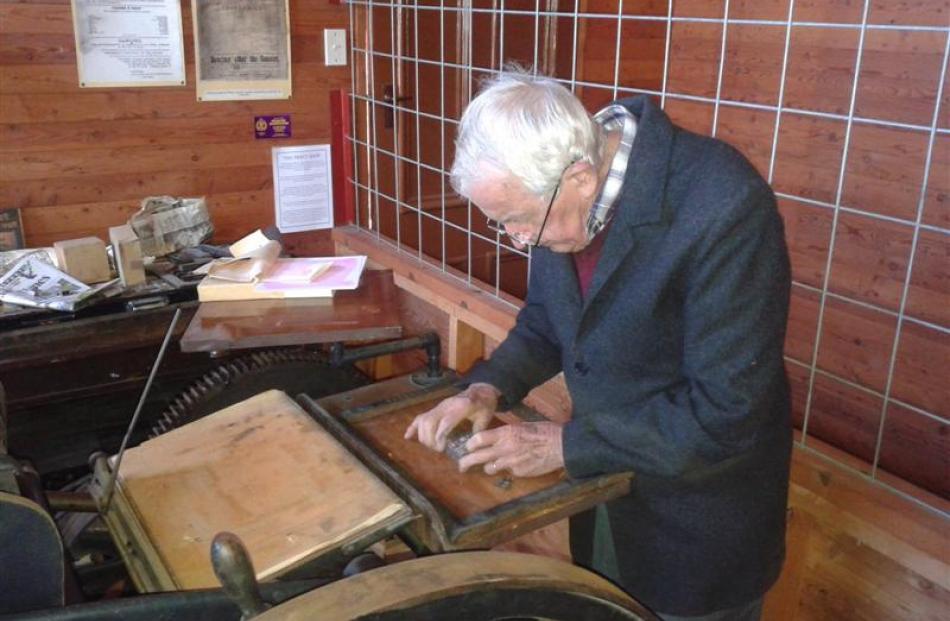 Lou Young, from the Ferrymead Printing Society, Christchurch, locks the type for the first print run in the Mt Ida Chronicle office since 1926. Photos by Raewyn Inder. 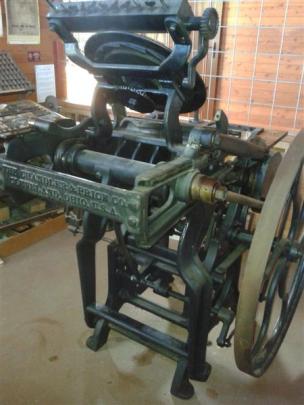 The Chandler & Price print machine now being used in the Chronicle Office.

After more than 87 years, a printing press is once again rolling out the masthead of the Mt Ida Chronicle, Naseby's former weekly newspaper.

Gold was discovered in the area in 1863 and the ensuing rush created a town. Six years and several name changes later, Naseby's Hugh Wilson founded the Mt Ida Chronicle, the first edition of which went on sale on February 5, 1869.

For 57 years the paper reported the comings and goings of the community, as well as national and international news, before the press was stopped and the doors closed after printing a Christmas Eve edition in 1926.

By the early 1920s goldmining was in decline and the town's population dwindled.

Ranfurly took over as the area's commercial centre and with the Otago Daily Times arriving on the train every day, ''it would have taken the whole of the Maniototo community to keep it [the Chronicle] going,'' Mr Inder said.

The association had rebuilt the Chronicle offices on the original site several years ago, forming an important part of the Maniototo Early Settlers Museum buildings and displays.

The original printing press was lost but around the time of the rebuild, Sandra Gable, of Christchurch, provided her late husband's printing machine and other equipment.

It was an American-made Chandler & Price printing press, smaller than the one the Chronicle was printed on, although there was once one in the same offices.

Following a recent visit from Lou Young, of the voluntary Ferrymead Printing Society, in Christchurch, the old press was brought back to life.

''My wife's niece [Raewyn Inder] asked if I would be interested to come down and take a look at the print machine in the town's museum. The idea of having a working print machine really interested her and many locals.

"I jumped at the chance, as print is a dying art around the world and to have a print workshop display in the museum really impressed me,'' Mr Young said.

Soon after he arrived, he was surprised to find out whose machine it had been.

''The biggest surprise of my trip was to learn that I had already seen the print shop machine and equipment many years before. ... John was a printing colleague of mine and we had worked together years ago.

"I have been in the very workshop he was running at home with this exact equipment. What an amazing coincidence.''

Mr Young and Mrs Inder cleaned up the machine and, with a bit of help from local mechanic Eric Swinbourn's oil can and rag, the print machine started to roll.

Mrs Inder said it was not until Mr Young was applying the ink that they realised just how significant the situation was.

While the press is too small to revive the Chronicle, there were plans to print postcards and other souvenir items, Mrs Inder said.

She also hoped to take some of the smaller pieces, a hand press for example, around schools in the area or have pupils visit Naseby to learn about the history of print and have a go at printing their names.

''We're going to put the ODT out of business,'' he joked.

The Maniototo Early Settlers Museum holds ledgers of almost every copy of the Mt Ida Chronicle. Excerpts can also be found on the PapersPast website.