tation manager Quentin McIntosh in front of the home of Burn 729am, the old Fenton Library in Ranfurly.
In December 1990, a group of enthusiastic broadcasters in Ranfurly were looking for ways to raise money for their community through their interest in radio.

They installed a transmitter in the pipe-band rooms and a mast in the town domain, the Government then granted a temporary broadcasting licence and it was full steam ahead.

On January 2, 1991 the fledgling station hit the airwaves, broadcasting from the old Ranfurly railway station. 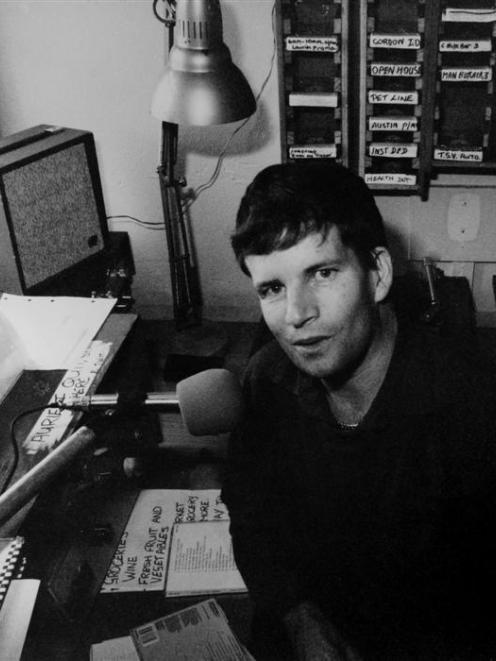 Announcer Graeme "Cowboy" Wilson in the station's early years. Photos by Sarah Marquet/ODT files
However, the then Classic Gold Radio Ranfurly was not the 24-hour, seven-day-a-week station it is today.

Three months later the group returned to the airwaves.

"We returned again in April for a second successful broadcast, during which with very primitive equipment in the back of an Escort van and on a day pouring with rain and blowing a gale we made local history by broadcasting the Patearoa Anzac Day service live," founding member Lawrence McCraw said.

Following that second broadcast the station began to operate 24 hours a day and a few months later, began broadcasting a news service.

It was an expensive service and something the station could not afford but Jed and Riemie Haaima, then owners of the Ranfurly Foodmarket, stepped up and funded the station at almost $1200 a month.

Around this time they also started receiving funding of about $800 a month from Trackside in return for broadcasting races from throughout the country.

No experience was necessary to work at the station which meant they took on anyone that wanted to volunteer, including children.

Emily Smith was 9 when she began working for the station in 2005. She started as the Maniototo Area School reporter then learned how to use the equipment, before becoming an announcer at the age of 10.

She worked there for a couple of hours a week until she left for boarding school at the age of 14.

She said she was not sure what she wanted to do when she was older but "would really like to keep radio going".

In 2005 the station moved to new premises, the old Fenton Library, which had been gutted and rebuilt to suit.

The following year the station was renamed Burn 729am, a namereflecting a strong link to the community and areas it broadcasts to, such as Poolburn, Idaburn, Wedderburn.

Appropriate considering it was the Maniototo community that saved the station, pulling it back from the brink of financial ruin.

It is a bit of a sore point for the community and something they don't like to discuss.

Under its previous name, Classic Gold, the station was in a "dire financial state" a member of the station committee and a part-time announcer, Denise Baddock, said.

Though the station had initially been run by volunteers, Graeme Wilson, or Cowboy, as his listeners would know him, said following a call from Work and Income, "they started to pay us; not much but just enough to get by on".

Following a piece of bad advice from a representative of the Department of Internal Affairs the station, as a not-for-profit entity, had not been paying any tax.

About the same time the station's bank began to question why their account was so overdrawn and threatened foreclosure and seizure of assets.

"Jack Rutherford, then school principal ... got a group together to see how they could save the station.

They came up with the idea to hold a radiothon ... and managed to raise about $35,500 from the local community, individual groups and businesses which enabled the committee to pay off debts and got the station on the straight and narrow," Mrs Baddock said.

The station's current chairwoman, Amie Pont, credits the station's success to the support from the people of Maniototo.

"Generally, the strength of the station is that it is a community station run and owned by the community. We can't just sit back and expect it to tick along. It needs that strong support from the community. It is not financed by a large radio network and it is an absolute credit to the community that we can maintain it."

"I can only see it going from strength to strength. It has never been as popular as now ... people phone, text and Facebook in with feedback and requests."

The station's success is reflected by the awards lined up in the foyer. These include the Central Otago Brand Ambassador award and the TrustPower Community award for Art and Culture, which they won three times.

To celebrate the station's 20-year anniversary this weekend there will be markets on the village green and a community hangi on Saturday.

There will also be an inaugural Maniototo Town Cup competition consisting of Top Town style events.