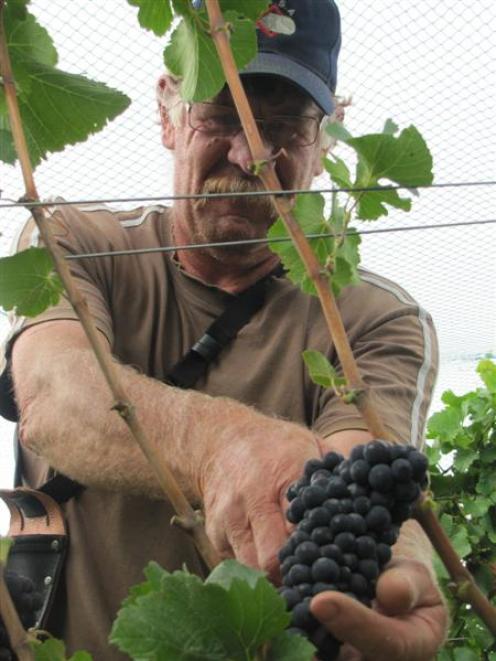 "It's the earliest vintage I have experienced," he said.

He put the early start down to a warm summer, which accelerated the ripening process.

The wet weather that plagued orchardists in late December and early January did not have the same impact on vineyards, Mr Bauer said.

Above average rainfall saved a lot of irrigation water but the flipside was more mulching was needed, as cover crops grew extremely quickly, he said.

They will be blended with chardonnay grapes at a ratio of 60:40 to make sparkling wines.

The pinot noir grapes used in sparkling wine were a different clone to those used for still wine, instead producing slightly bigger berries with more fruitiness, Mr Bauer said.

After tasting the first pressing, he said he was happy with the flavours.

About 45 tonnes of grapes will be picked at Quartz Reef this week, before picking was postponed for a week while Mr Bauer attended the World of Pinot gathering in California.

He expected to start picking pinot noir grapes for still wine about March 21.

"I'm looking forward to a good Central Otago harvest this year but that's totally dependent on a dry autumn."

Steve Green, who is principal of Bannockburn winery Carrick Wines, and also chairman of the Wine Institute and deputy chairman of New Zealand Winegrowers, said winemakers in the region he had spoken to were anticipating a good harvest.

"You don't like to say until it's in the bag, but we've had a good spring, good flowering and good fruit set, so the potential is certainly there."

Bunch weights were also up, which would also push volume up, he said.

Like Quartz Reef, other vineyards also predicted an early start to the season.

"In the 15 or so years I've been involved, I can't recall things being this early."