By Jared Morgan
0 Comments
As far as mountain bike racing goes, it did not come much closer than a fraction of a second between the two top men’s team as they crossed the finish after 56km in the second The Prospector yesterday.

It was Josh Burnett and Ben Oliver, of team Mito QT NZ, who reigned supreme for a second year at Matangi Station.

Oliver said he and Burnett were "stoked".

"We knew we had to keep the pressure on and play defensive today as they would be pushing hard to get away from us."

The Talley’s Team, made up of Cameron Jones and Matt Wilson could not shake the strong pair.

"We will definitely be back next year," Wilson said.

"This is my second year and I just love riding these trails. It is just an awesome weekend."

Mary Gray and Sarah Ward Gilbert (Powered by MitoQ) showed pure class, with a clean sweep of stage wins and a strong finish on the last day giving them 25 minutes over rivals Erin Greene and Hannah Millar (Giro Giraffes).

Gray said the racing, while competitive, was collegial.

"This is such a social race and fantastic courses."

"We would love to see more female teams in the future as the race is totally doable with a bit of training and everyone has such an epic time here." 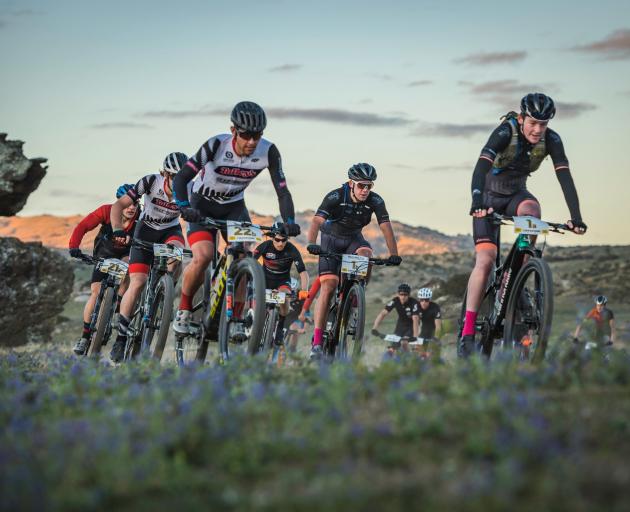 Riders set off on the final day of the three-day The Prospector in the Matangi MTB Park yesterday. PHOTO: AUTHENTICAS

"To have someone the whole way round to enjoy it with you is cool," Sheppard said.

Ward, as the only Australian, enjoyed the experience.

"One of the great things about The Prospector is that you get to connect all these awesome tracks together and get some flow."

Stage one on Saturday was on Earnscleugh Station.

Sheppard and Ward extended their lead past 12 minutes to Josie Wilcox and Ben Wilson. The 2022 Prospector had a full list of 200 riders but lost a few just before the event. Despite this, it is one of the only events still on the calendar and a perfect warm up before athletes head off on the World Cup circuit and gain points for Commonwealth Games selection.

The event hosts categories for individual athletes from young to old, and teams.