Racing in the forest was 'sled dog heaven' 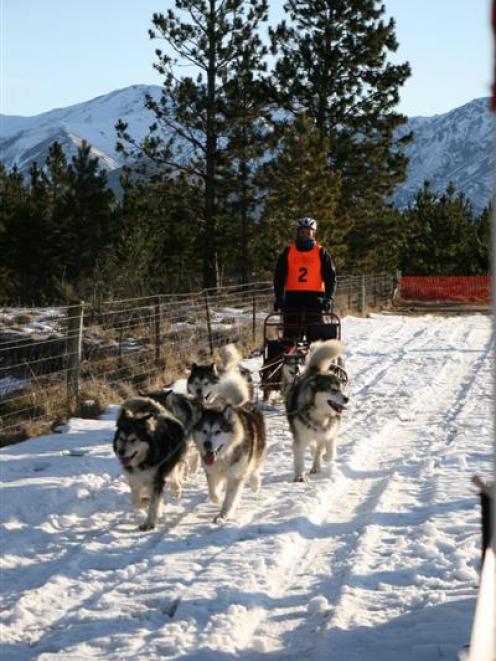 About 150 dogs and more than 60 people took part in the two day forest sled dog race in the Maniototo, organised by the Otago Sled Dog Racing Association.

Both days involved race heats with teams of two to eight dogs and one ''musher'' on wheeled rigs, as well as races involving mountain bikes, scooters and runners, all pulled by dogs.

On Saturday, St Bathans resident Tania Spencer, who completed the two dog rig class race with Siberian huskies Mosin and Nova, said the race was ''so much fun''.

The track was quite bumpy with ice and a little bit of snow, but you had to trust the dogs because they knew where to ''dart between the icy bits''.

It was his first ''real racing season'' and he loved it, he said.

Mrs Voice raced with her ''rare'' Canadian Eskimo dogs and said racing meant putting ''a lot of trust'' in the dogs. She had received ''absolutely fantastic'' feedback from spectators and participants, and was already planning next year's race.

They plan to have more space for spectators to come and watch and a coffee cart to make it ''much more accessible'' for everyone.