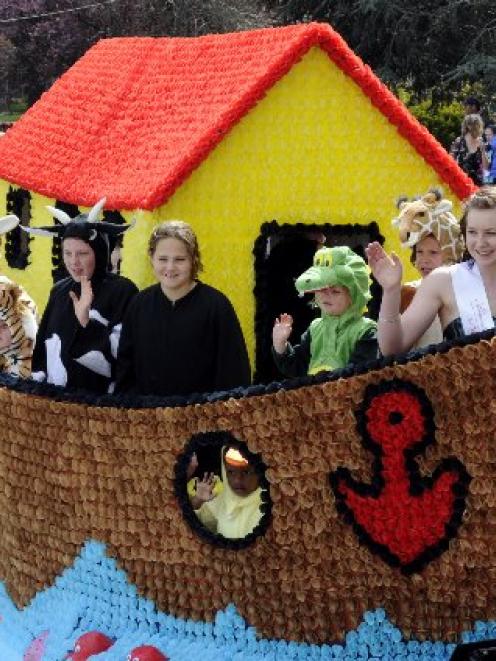 She has helped build floats almost every year since 1970 and said back then there were significantly more floats involved in the parade and so anything that could be done now to get more people involved was a good thing.

Festival event manager Martin McPherson said in the 1970s the parades had between 35 and 40 floats but over the past 10 to 15 years that had been steadily decreasing and it was becoming hard to find enough groups wanting to enter competitive floats.

It was announced this week that the rules concerning floats for the Alexandra Blossom Festival were being relaxed in order to attract more participants following a decreasing number of competitive floats over the past few years.

Mr McPherson said the traditional competitive floats which featured princesses and thousands of generally sweet-pea-sized flowers took a lot of time and effort to create which was not feasible for some community groups wanting to enter.

"Flower-making takes time, skill and a huge commitment from those involved and often discourages participation.

For the festival to maintain its focus on the parade we need to explore other ways of float building."

He said this year floats with fewer flowers would be allowed and, when registration forms were distributed later this month, they would include clear instructions on the requirement for the competitive floats.

However, he said he expected the relaxation of the rules might be a little controversial and welcomed public comment on the issue.

The topic was also debated at the festival committee's annual meeting earlier this year.

At the time, festival chairwoman Clair Higginson said it had heard from those who felt there were not enough people around with the time and skills to create a traditional float.

She said there was also some pressure for contemporary floats, without blossoms, to be able to have a princess and to be eligible for the vote for best float.

While men from the Alexandra Men's Shed were on hand to offer assistance in float-building, Mr McPherson said it also needed to be considered whether floats could be reused and redesigned from year to year.