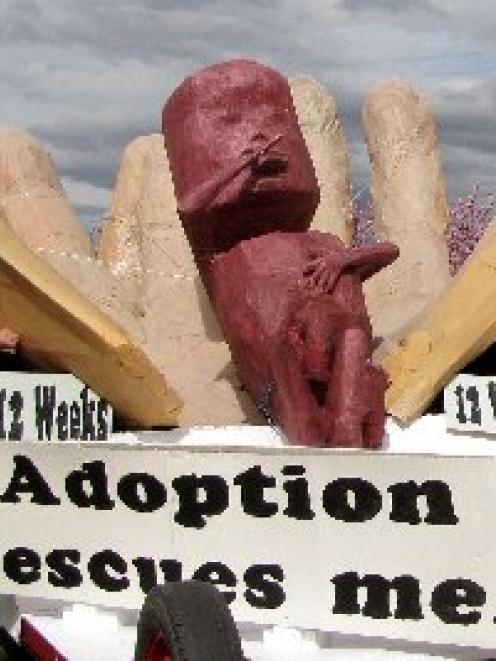 Bruce Lietze and Alistair O'Brien with part of their Blossom Festival float which has been judged ''offensive''. Photo by Sarah Marquet.
For the first time in the Alexandra Blossom Festival's history, aspects of a float have been deemed offensive and it will not appear in tomorrow's 57th annual procession.

The float in question contains a large model of a 12-week-old foetus, cradled in two hands, with signs including statements such as ''Who will save me?'' and ''Adoption will save me''.

Festival event manager Martin McPherson had visited the shed on Wednesday where the floats were being built and, after discussion with festival committee members, the foetus and some signs were deemed offensive, inappropriate and too political.

The group behind it, Life is Precious, was offered a compromise - remove the ''offensive'' elements or replace them with something else but the outraged float builders say they cannot do that and feel they have been effectively banned from the parade.

''I'm digging my toes in. If the whole thing doesn't go in, it doesn't go in [at all]. I can't compromise to the extent that has been suggested,'' group spokesman Alistair O'Brien said.

The group has labelled it an attack on freedom of speech.

Mr O'Brien said what was offensive to one person might not be to another and the use of ''bastard'' in the Alexandra and Dunstan Lions clubs' Mt Everest, Sir Edmund Hillary-themed ''We knocked the bastard off'' float was offensive to him and ''could easily be considered offensive by many families''.

He said he felt there was nothing offensive or shocking about the banned float and that the unborn baby was instead ''beautiful'' and ''serene''.

''I have six children and don't want to put anything shocking in the parade.''

Mr McPherson said the rest of the float was ''terrific''. He would love to have had it in the parade and he did feel bad for pulling the pin on the group at the eleventh hour.

The men have been working on the float for the past three months and are devastated it has all been for nothing.

Mr O'Brien said the group agreed the festival committee had a duty to censor parade entries but ''where they have decided to draw the line of decency for the family friendly parade is, sadly, ludicrous''.

Festival committee chairwoman Clair Higginson said the committee reserved the right to ask people to withdraw inappropriate floats. It had exercised that right on this occasion, as the float could have been ''upsetting'' to some people.

She said the festival was meant to have themes of ''celebration, commemoration, beauty, spring, having fun and creating a sense of togetherness''.

Organisers have arranged for the float's princess, Sarah Hesson, to take a seat on a non-competitive float so she can still take part in the contest for the festival crown.

Ms Higginson said the committee, for future festivals, might ''go back and look at how we ask people to describe their floats''.

The group had entered a float with a similar theme last year.