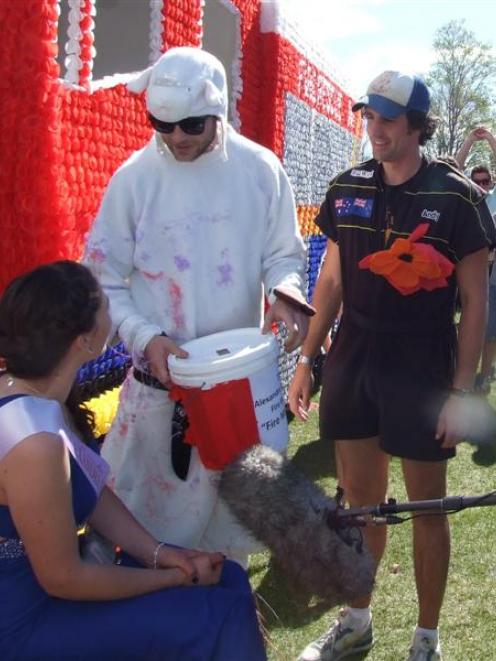 The pair were surprise guests at this year's festival and "gatecrashed" the festival parade in a camper van, Lee driving and Blake, dressed in a sheep costume, on top of the vehicle and waving to the crowd.

Best known for their radio and television work, the duo are spending a month on the road in New Zealand, filming a new television show called Hamish and Andy's Caravan of Courage: Australia versus New Zealand.

The show focuses on transtasman rivalry. So far, New Zealand is on the winning side of the ledger, Lee said.

"Of course that could be because we haven't done the official tour of Australia yet ..."

He was impressed with the buzz of activity in Alexandra and said it was great to be part of the festival.

"I like all the cars and floats and people dressed weirdly - I guess this is just a typical day in Alexandra and it's like this 100% of the time.

The duo were taken under the wing of the Alexandra Volunteer Fire Brigade for the day.

Blake and Lee have already filmed a segment of their new series in Dunedin, taking to the field with the Nude Blacks, and also filmed their recent encounter with Invercargill Mayor Tim Shadbolt.

"We discovered that he once wrote a book on concrete called Concrete concrete, which is very interesting," Lee said.

They had also spent a night "under a rock" in Fiordland, looking for moose, which proved elusive. "It didn't show."

The southern part of this country is familiar territory for Blake, who starred in thefeature film Two Little Boys alongside Bret McKenzie.

The film, set in the Catlins, opened last week and is based on a novel by Duncan Sarkies and directed by Robert Sarkies.