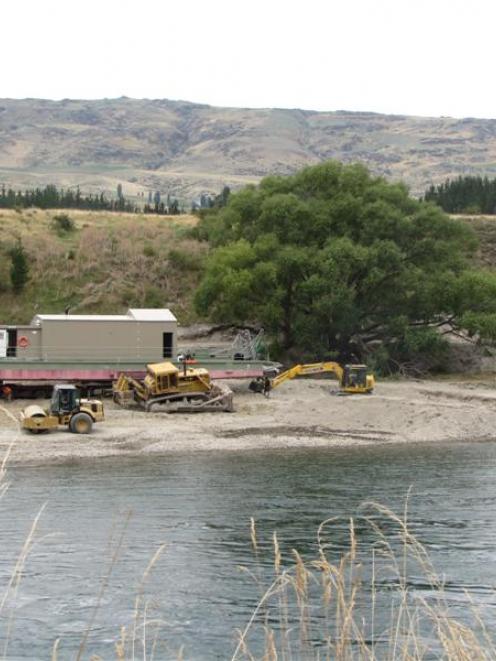 Workers clear a path for the dredge to be launched into the Clutha River, near Coal Creek. Photo by Sarah Marquet.
"There's 10 lifetimes' worth of gold in there," gold miner Danny Walker said yesterday on his way to check the progress of a dredge his company was launching into the Clutha River just below the Roxburgh Dam.

The Cold Gold Clutha Ltd project, which has been in the pipeline since 2004, was yesterday tantalisingly close to starting, with the 24m suction dredge resting on the eastern bank of the river near Coal Creek.

However, the truck carrying it had become bogged down in gravel and a team was working yesterday to dig out the truck.

Once the dredge hits the water, it is expected to begin operating within a few weeks.

The company intended to "run the system" in the next few days but as it was a "sophisticated piece of equipment" it was expected several things would need tweaking before the dredge was fully operational.

Previously, Mr Walker said the project stacked up when the price of gold was $US500 (then $NZ630) an ounce and that the company would need to recover 3oz a day for it to be worthwhile.

Although the company had not done any initial prospecting other than talking to locals and looking at historical records, he said there was "10 lifetimes' worth of gold" in the 60km stretch of river and, providing it was not dammed further and the price of gold remained high, the company could "just keep going".

Roxburgh gold prospector Stu Edgecumbe said there was plenty of gold in the river.

"There's [specks of] gold washing up on the beaches, which indicates there's a lot more gold."

Mr Edgecumbe has his own claim - "60m from my back door" - which he works with pick, shovel, pan and a small sluice box. With them, he finds a ready supply of gold flakes.

This week, he went to the river where the dredge was being launched and "took a sample".

"I got gold just off the beach."

The project would be a great asset to the community as it would "be a tourist attraction in its own right" and create jobs.

Mr Walker said six people were needed to run the dredge, with two on deck at any one time.

The dredge would have a 300mm-wide suction pump, capable of sucking 30cu m of material an hour, as well as a little digger, to scoop up material from the river bed.

The material would go through various screens, be pumped over sluices and be spinned in "centrifugal concentrators", all that work happening on board.

Two anchors, each capable of holding 40 tonnes, would secure the dredge in the river. Fully loaded, the dredge would weigh 10 tonnes.

The company had consent to run the operation 13 hours a day, but Mr Walker hoped that could be changed to 24 hours a day.

The company gained minerals consent in 2005 for the 60km lower Clutha River from Roxburgh to Tuapeka Mouth and in 2008 gained resource consent from the Otago Regional Council.

It had intended to begin operation in mid-2009 but the "very expensive" project was delayed because of financial constraints.

The river was heavily dredged in the late 1800s and early 1900s and most of the tailings had drifted downstream but Mr Walker hoped the Roxburgh Dam, built in the 1950s, had helped spread out the tailings so they would be working on a riverbed much the same as the early miners would have worked.

Mr Edgecumbe said he thought the river had deepened by about 1.5m since 1960 and with the "wee digger" the dredge could access material deeper than the early miners had.

Mr Walker, who works seven or eight months a year running a mine in Mongolia, has had about 20 years' experience on New Zealand suction dredges.