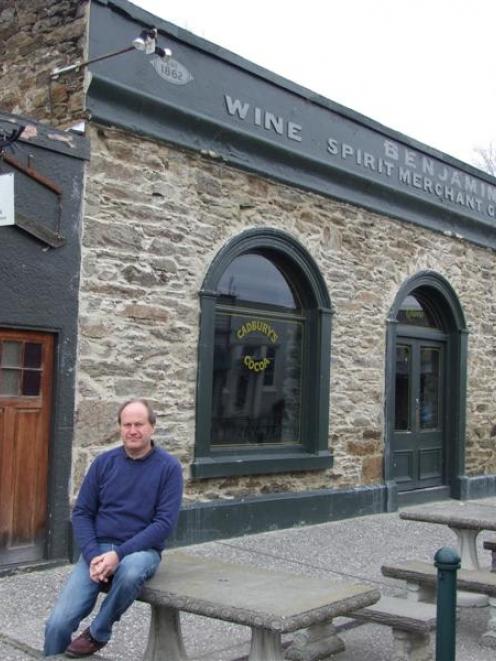 Oliver's co-owner David Ritchie outside the historic complex at Clyde. Photo by Lynda van Kempen.
A planned revamp of Oliver's buildings at Clyde which would lead to a revival of the restaurant and the establishment of a craft brewery seem to have found favour with the public.

David and Andrea Ritchie, who have owned Oliver's for four years, have applied for resource consent to alter the category 1 historic building, Naylor's store (the former restaurant building) as well as the adjacent lean-to and garage, to pave the way for the new facilities.

A hearing will be held on August 12.

Mr Naylor was one of the first storekeepers in Clyde and arrived with the first gold miners, about 1862.

The Ritchies have already restored and revamped some of the buildings and have worked in closely with Heritage New Zealand, formerly known as the New Zealand Historic Places Trust.

The couple live in the refurbished barn on the site.

They have earthquake-strengthened the former restaurant building so it now meets 100% of the new building standards.

The old garage will be converted into a cafe and a new addition will replace the lean-to to the west of the restaurant.

The Ritchies plan to open a craft brewery and also establish a bakery on the site.

Fleur Sullivan, now of Moeraki, realised the potential of the historic buildings in the heart of Clyde and set up Oliver's restaurant in the store building more than 30 years ago and visitor accommodation in some of the other buildings on site.

During her time as host, Oliver's became a popular wedding venue as well as an acclaimed restaurant, specialising in local produce.

The Ritchies were the sixth owners in 12 years when they took over the complex in February 2010.

In the resource consent application, conservation architect Jackie Gillies, of Queenstown, said the old stone buildings were some of Clyde's most valued heritage buildings but the garage and lean-to were built in the 1940s or later so were less significant.

The work planned would provide the historic buildings with ''a successful and sustainable use'' and would give a much-needed ''lift'' to the corner of the site facing Sunderland St and the Fache St right of way, Ms Gillies said.

"The new uses continue the existing ones with minor changes of flavour but not substance and comply with the site's zoning and heritage precinct rules,'' she said.