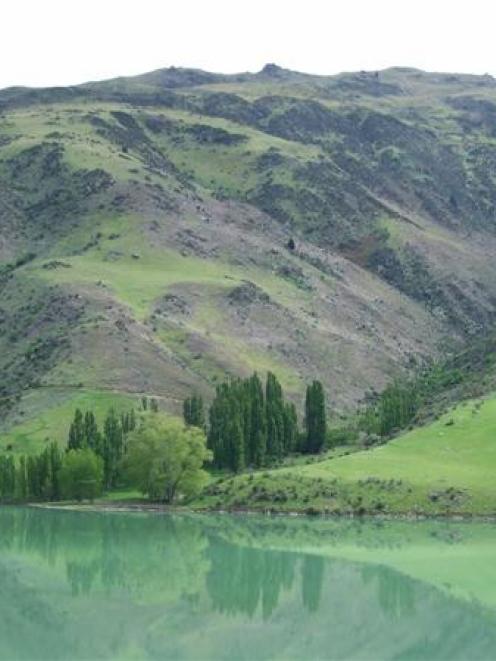 The higher-than-usual spring rainfall in Central Otago has turned usually barren hills green, including these heights at the Clyde end of Lake Dunstan. Photo by Lynda Van Kempen.
A greener Central Otago in future with fuller rivers and lakes during winter and spring was the picture painted by climate scientist Jim Salinger when he was in the district last week to talk about climate change.

Dr Salinger told seminars in Cromwell and Wanaka that the country, as a whole, was getting warmer. That trend had continued for the past three decades.

"This part of New Zealand that is water-dry will be getting more rain. There's been a decrease in frosts and we certainly don't get the length of freezes we used to get."

Climate scientists were concerned about the changes - mostly the extremes - with Arctic sea-ice thinning and shrinking and sea levels rising worldwide.

The National Institute of Water and Atmospheric Research's latest modelling data, looking towards 2040 and 2090, suggested it would be 10% wetter in the west, including Central Otago, Dr Salinger said.

"In winter you will get more rain than snow and the westerlies will be stronger. The down side of this, more water, will certainly mean changes to rivers and lakes with more chance of flooding likely in the non-hydro lakes - Wakatipu and Wanaka."

Contact Energy, which operated the hydro dams on the river, would be able to generate more power, especially in the winter.

Another scientific survey, looking to 2030, predicted the temperature of Central Otago would increase by about 2deg.

"As far as grape-growing goes, that may mean some changes to the varieties grown but the biggest impact will be less frosts and probably no droughts," Dr Salinger said.

University of Otago Emeritus Prof of geography Blair Fitzharris, who was at the Cromwell seminar, asked if the predicted changes would be an incentive for more investment in hydro dams on the Clutha River. Contact Energy is already reconsidering potential dams at Luggate, Queensberry, Beaumont and Tuapeka Mouth.

Dr Salinger said his personal view was that the days of the large hydro dams were over, because of the hurdles a big project would face.