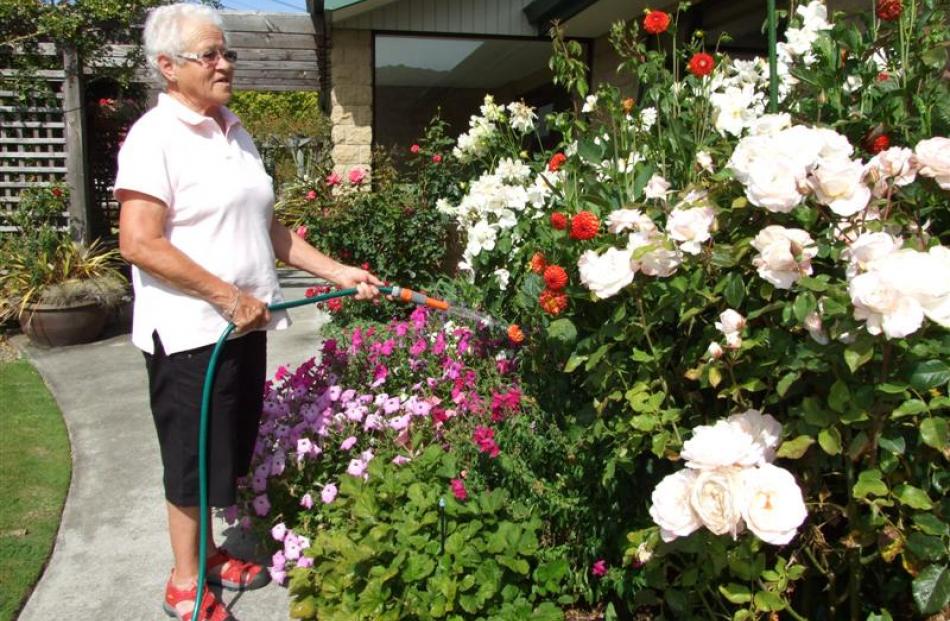 Pat Braddick, of Clyde, waters her flower garden yesterday. She said she would be ''not impressed'' if her water rate went up this year. Fache St was ''like a desert in places, with the odd oasis'', she said. Photo by Lynda van Kempen.

Since water meters were introduced to Central Otago, water use, in the Vincent ward at least, has come way down, so council revenue has dropped, too.

It was told water meter income was a ''major risk'' and if nothing was done, accounts could fall further into deficit.

Under proposed rates for the coming year, the annual uniform charge each ratepayer will pay for water will increase.

While that has been somewhat softened by pushing out some costs to other years, for some towns, the increase is significant.

Ratepayers on a town supply in Clyde, for example, face an annual uniform charge of about $120, up from $45.10.

Board member Malcolm Topliss said he was not comfortable with the increases but accepted it had to be done.

Figures for other wards have yet to be determined but ''a major risk for all community boards is water meter income,'' council corporate services manager Susan Finlay said.

''Now that we have more than one year's usage data, we have reduced water meter income [budgets] to better reflect that usage data.''

Overall, a 2.2% decrease in rates is proposed for those in the Vincent ward. That is a draft figure though, to go into the council's draft annual plan and therefore, would likely change, she said.

Several issues, such as the Ice Inline project - to relocate the ice rink next to the Molyneux Aquatic Centre and use waste heat from the ice making plant to heat the pool - were yet to be considered but would have an impact on rates.

She said the ward component of rates was set to rise by a proposed 3.5%, although there were still three more community boards to consider their figures, as well as the council, so that figure could also change.