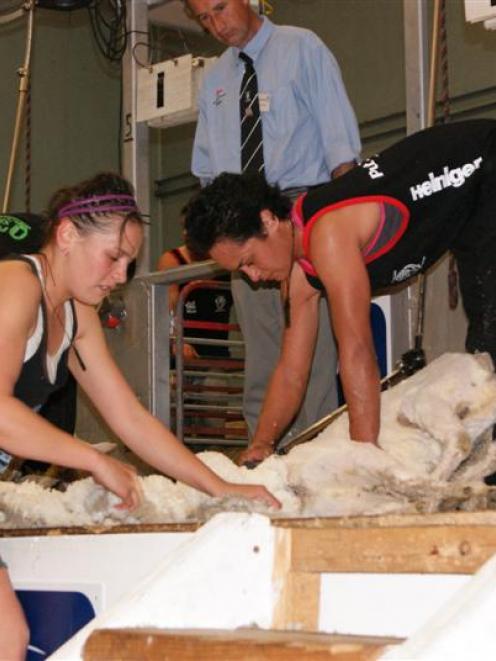 Senior shearing champion, Australia-based Te Atakura Crawford, originally of Te Karaka, works with wool handler Monica Potae, of Tokomaru Bay, in the teams event at the New Zealand Merino Shears in Alexandra on Saturday. Their team, Advanced Technique, was placed third. Photo by Sarah Marquet.
For the first time since 1985, a woman has won the senior shearing title at the New Zealand Merino Shears, held in Alexandra on Saturday.

Te Atakura Crawford (26), originally of Te Karaka, near Gisborne, but working in Australia, had only been back in New Zealand a few hours before she picked up the handpiece and took on 28 other shearers from around the country.

She was not the fastest shearer in the field but made up for it in quality points, something women are known for, according to New Zealand Merino Shearing Society president Mervyn Kinaston.

''It's unusual to have women shearers ... but normally they're very tidy shearers.''

Crawford said as her father was a shearer and she grew up in the sheds, shearing was in her blood.

After leaving school she worked as a wool handler for two years before switching to shearing.

''I just always knew that if I was going to end up in this industry, I wanted to be a shearer. Wool handling is too boring and shearing is more physical.''

Crawford was no stranger to the pressure of competition.

She competed in the senior shearing finals at the Golden Fleece competition in Masterton last year, finishing sixth.

She said her win in the five-sheep category was completely unexpected.

''It's mean, awesome. I'm glad I didn't come back for nothing ... I was quite nervous because it was my first time shearing merinos with a cover comb.''

The 1985 winner, Jills Angus Burney, of Masterton (then Jillian Burney), was in the audience. She said Crawford had a bright future in shearing.

Organisers said as far as they knew the two women were the only ones to have taken home shearing titles from this event.

For the fourth consecutive year Australian Damien Boyle won the open shearing finals, despite Alexandra shearer Dion Morrell finishing more than a sheep ahead of him in the 12-sheep competition.

Again, it was quality points that carried Boyle through to win with the biggest margin in his four-year winning streak. Morrell (50) was disappointed but said, as he did not shear for a living any more, he was not expecting to make the finals.

''Part of me is gutted I didn't take Damien Boyle down but he's so bloody good. It's great that he comes here; he's a fantastic shearer and a bloody good guy.''

Morrell's placing qualified him for a position in the New Zealand team with Rowland Smith and John Kirkpatrick for tests against Australia in Warrnambool later this month and at the Golden Shears in Masterton in March.

However, he said he had not decided whether he would take that up, claiming he was unfit and did not want to let the team down.

Boyle (37), a Western Australian farmer, has been competing at the Alexandra event for 17 years and said he never thought he would win once, let alone four times in a row, despite making the finals every year.

He said his father instilled the value of quality shearing in him.

He said he would be back next year, aiming for a fifth win.