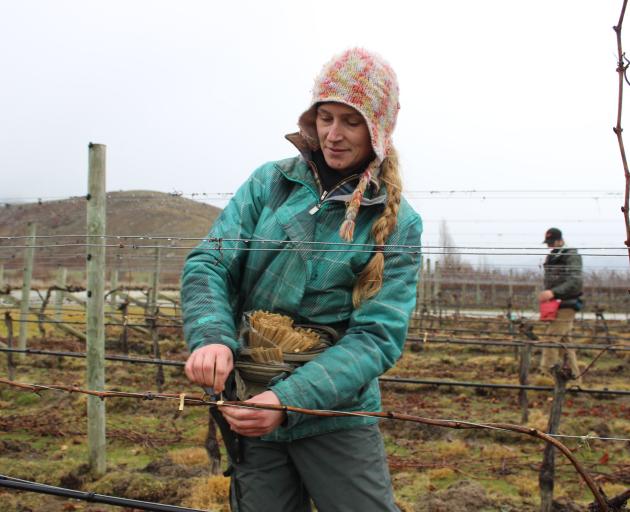 Viticulturist Brenda Stringer braves the rain to prune vines at a vineyard in Bendigo on Tuesday. Photo: Jono Edwards
The women of Central Otago's wine industry will this week prove viticulture is no longer just a man's game.

Of the eight competitors in the Central Otago Young Viticulturist of the Year contest in Cromwell tomorrow, five are women. This is the most of any New Zealand region since the competition began in 2006.

Competitor Brenda Stringer (29), who works for Peregrine Wines, near Queenstown, said she noticed a lot of young women in the area's wine industry.

''I think Central Otago is a very desirable place to live and it's not as big as somewhere like Marlborough, so it's a bit more approachable for females.''

She still came across people in the industry with conservative views towards women's abilities, she said.

''It's good to be able to prove yourself against the guys and say actually, we are just as good, if not better.''

Her dream was to own her own vineyard.

''But I think I've got a lot of learning to do before I branch out on my own.''

Ms Stringer competed last year but did not place.

''It was about benchmarking, to see where I was at. The marks will show whether I've improved.''

''There is definitely a strong female presence in the area.''

The idea of the competition was to give contestants feedback on where they were in their careers, he said.

''It's a social networking thing, but also about learning about what other parts of the country do. New Zealand's wine industry is diverse and what we deal with in Central is quite different to other areas.''

The competition will be held at Otago Polytechnic's Central Campus in Cromwell and test entrants in both physical and written skills.

The winner will go to the national competition in Marlborough late next month.

Mr Paulin is the only Central Otago competitor to have won the trophy, which he did in 2011.