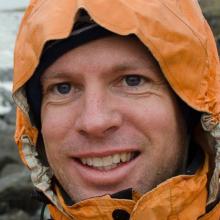 Nathan Deutschbein
The man killed in an avalanche near Mt Cook on Tuesday was an Australian  police officer.

Police yesterday named Nathan Deutschbein (40), of  New South Wales, as the man who died. His death has been referred to the coroner.

The avalanche happened about 1.30pm on the Eugenie Glacier, just below the Footstool  peak.

Another man suffered minor injuries in the 20m-wide  avalanche, that slipped  300m,  and was taken to Twizel for medical treatment.

A third climber was not involved in the 300m slide, having stayed behind at the Sefton Bivouac hut because  of sickness.

Aoraki/Mt Cook National Park operations manager Brent Swanson said more rain had fallen  in the area  than was  forecast, which increased the chances of  avalanches.

"The snow at Eugenie Glacier was loose and slushy as warmer temperatures meant the snow hadn’t frozen for several nights."

A Department of Conservation mountain rescue team picked up the surviving climber and recovered the dead climber’s body. The hazardous conditions meant the rescue helicopter could not land.

"Our crew had to use a rescue line attached to the helicopter because of the high risk of further avalanches in the area and weak crevasse bridges. Soon after, the crew flew to Freds Stream to rescue a hunter who had dislocated his shoulder after a fall," Mr Swanson said.

"The team of four involved in yesterday’s two rescues often work in hazardous conditions to help people in trouble. Sadly, they’re not able to save everyone."

He praised both the climbers and the hunter for carrying personal locator beacons.

"This meant we knew exactly where they were in trouble and could quickly assemble a crew to rescue them."

Mid-South Canterbury Area Commander Inspector Dave Gaskin said police had no details of the climbers but understood they were reasonably proficient and experienced.

"There’s various types of snowpack conditions, so loose and wet is as it sounds,’ he said.

"It’s quite a slushy, icy mixture. That condition can mean that sort of avalanche can run a lot further than a typical slab avalanche which is nicely bound together."

The New Zealand Herald reported a Gofundme page  had been set up to support Mr Deutschbein’s wife, Skye, and their two young daughters.

The latest tragedy comes after mountain guides Martin Hess (50) and Wolfgang Maier (58) were killed last month in an avalanche on Mt Hicks that also buried adventurer and philanthropist Jo Morgan, who survived.