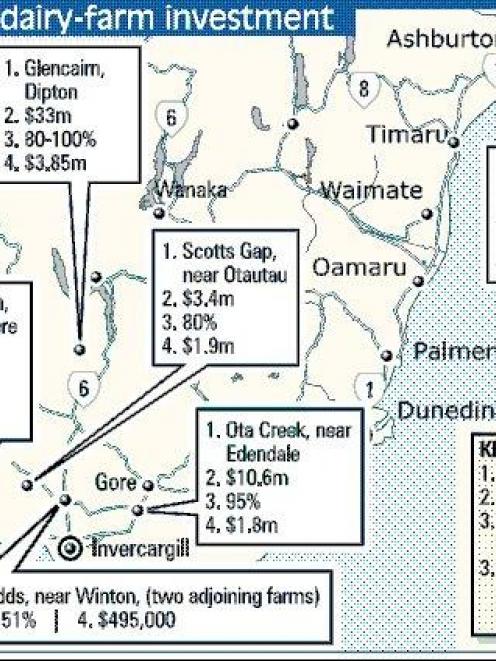 Aquila AgrarInvest II, which manages funds for more than 1000 small investors, and institutional investors NZ Milchfarm Investments and Alceda Star have spent more than $70 million on the farms - seven dairy units and one sheep farm, which will be converted to dairying - following approval from the Overseas Investment Office.

Seven of the farms are in Southland and the other is at Mead, near Rakaia, in Canterbury. Most of the properties will continue to have New Zealand co-owners, with German ownership ranging from 51% to 100%.

Farm operations are being supervised by MyFarm, a dairy farm investment and management company based in Feilding.

They also planned to invest a further $11.3 million over the next 12 months into farm improvements such as underpasses, bridges, fencing, irrigation, new pasture, cowsheds and homes and to increase milk production by 1.27 million kg of milk solids, he said.

It was expected 20 full-time equivalent jobs would be created through the development period, dropping to 11.75 full-time staff once development was completed, Mr Rowan said.

Glencairn is the largest of the farms and the most expensive. It was owned by Glencairn Land Company Ltd, whose directors are Kevin Gibson, of Tauranga, and Grant Ruddenklau and Andrew Taylor, both of Dipton.

The property is being run as two adjoining dairy units milking a total of 1700 cows. The new owners plan to carry out $3.85 million of development, including building a 60-bale rotary cowshed, two houses, an effluent pond, upgrading existing effluent facilities, irrigating 150ha of lighter soil, improving drainage on some parts of the farm, regrassing the grazing support block and spreading additional fertiliser.