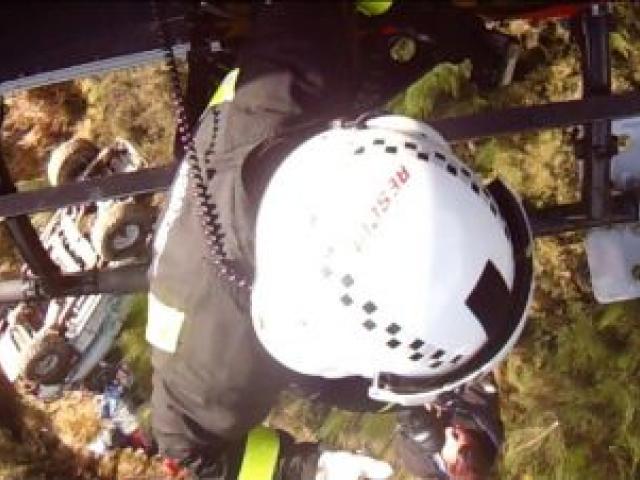 A Helicopters Otago crew member winches a Christchurch man to safety after the 4WD vehicle he and another man were in rolled about 60m down a steep bank at Piano Flat, west of Roxburgh, about 1pm yesterday. Photo by Helicopters Otago.
Two Christchurch men are recovering in Dunedin Hospital after being winched from a 4WD vehicle which rolled about 60m down a steep bank in remote country west of Roxburgh yesterday.

The men, aged 36 and 56, were part of a group travelling in several vehicles on remote Canton Rd up the Waikaia Valley in Northern Southland.

Their vehicle rolled in soft ground and went over a steep bank, rolling several times before coming to a stop on its roof about 60m below the road.

A Rescue Co-ordination Centre New Zealand (RCCNZ) spokeswoman said the 56-year-old man had a dislocated shoulder and both men had cuts and bruises.

Another member of the party activated a personal locater beacon at 12.45pm and the Otago Regional Rescue Helicopter was dispatched from Mosgiel about 1pm.

Soon afterwards, the ambulance communications service was alerted to the incident via the mountain radio network.

Helicopters Otago director and pilot Graeme Gale said the men were winched from the vehicle and flown to Dunedin Hospital.

''They were in an extremely remote location and managed to put out the call for help,'' he said.

The RCCNZ spokeswoman said the incident illustrated the importance of having locater beacons when travelling into remote country.

''People often think about taking beacons when they go boating and tramping, but this shows how effective it is when you do carry these beacons on any kind of outdoor activity.

''It's really useful to have a means of communication that pinpoints exactly where you are, to bring help as quickly as possible,'' she said.