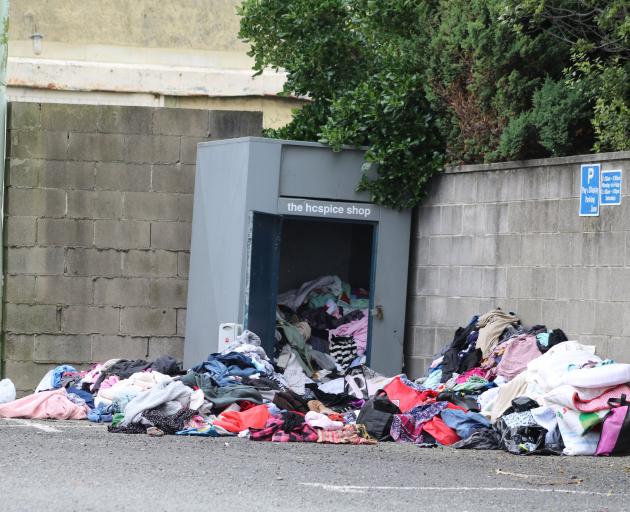 Clothing and other rubbish is being left illegally at many spots throughout the district. PHOTO: KAYLA HODGE
Illegal rubbish dumping at several sites throughout the Waitaki and Waimate districts has been labelled irresponsible.

In the last month, metal poles, clothes-lines and fruit were left outside the Waitaki District Council’s Enfield recycling site, and mountains of clothing were dumped outside a clothing bin in Oamaru’s Eden St.

Boxes of bottles were stacked by bins in the Waitaki Valley, and rubbish and cardboard were thrown next to the Glenavy Recycling depot.

"It’s just irresponsible behaviour. We all have to take responsibility for our own rubbish, and there’s lots of options around how to get rid of it responsibly," Mr Kircher said.

Infringement notices of up to $400 could be issued by the council to perpetrators.

The council funded several services to lower the disposal cost, but those dumping rubbish expected somebody else to pay for them.

No cameras were on site at present, but mobile cameras could be installed if the problem continued. 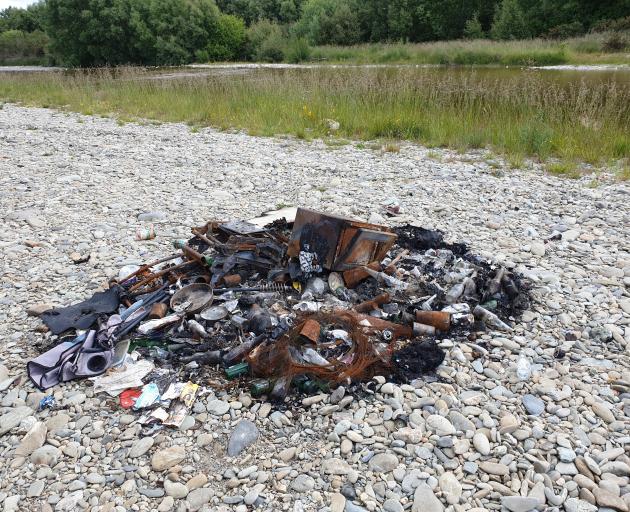 Burnt remains of rubbish were found at Robbs Crossing, near Kakanui, at the end of last year. PHOTO: SUPPLIED
A recent council survey asked the community if it wanted ratepayer-funded kerbside collection, and the results were "mixed".

"Enough of them are saying they are happy enough with the service, but as usual, you get that very small percentage who just don’t want to do the right thing and make it a problem for everyone else.

"It does become everyone else's problem because if we end up having to go and get it collected, if there’s contaminated recycling, not only do we lose that recycling, we have to pay for all of that to be dumped. It’s just a cost to ratepayers that they shouldn’t have."

Waimate District Council chief executive Stuart Duncan said it was an ongoing issue at most of the eight recycling sites, in particular Holme Station and Glenavy.

"It is disappointing that some people fail to do the right thing. Ultimately, rubbish is an issue for everyone, not just councils. We, as consumers, are all responsible for what we buy, use and re-use, recycle and dispose of. Any additional cleaning of these recycling depots comes at an extra cost to the ratepayers,” Mr Duncan said.

Dumping non-recyclable material was "not at all acceptable and breaches the signage guidelines".

"Where possible, council will investigate and if identified, further action will be taken."

The council identified 14 people recycling incorrectly in the past year, and they were issued with warnings, and further education.

None of the sites had cameras, but there were fixed signs clearly stating dumping rubbish was an offence.

There were also reports of rubbish being dumped on Department of Conservation land, at Robbs Crossing, Kakanui, last year.

Doc coastal Otago acting operations manger Craig Wilson said Doc had not received reports of rubbish in the area, but it was unacceptable.

"Any person responsible for illegal dumping of rubbish in reserves or on conservation estate can be prosecuted and sentenced to two years’ imprisonment and or a fine not exceeding $100,000," Mr Wilson said.