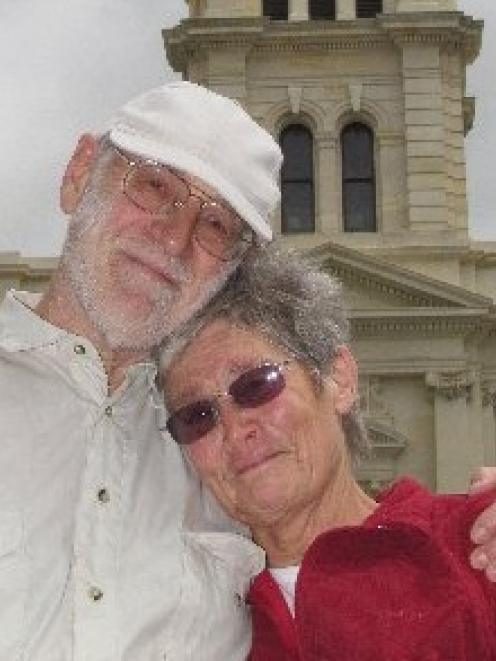 John and Nina Walker, of Shepshed, Leicestershire, England, were checking out Oamaru's Victorian buildings yesterday afternoon. Photo by Ben Guild.
What were you doing at 12.30pm yesterday? Chances are you were like hundreds of others throughout the region, out and about enjoying a brilliant Otago summer's day. On the dot of 12.30pm, Otago Daily Times reporters spoke to a handful of people about what brought them to their particular location. Here are their stories.

Their land-locked hometown of Shepshed, Leicestershire, was once the largest village in all of England.

It is now something altogether less grand: the smallest town in all of England.

"It's fascinating they are doing real things with it," Mrs Walker said.

"They were really friendly guys - we went down there and had a good natter."

Both had sat on a stationary Penny Farthing and Mrs Walker said she could barely touch the peddles.

Back for their 10th visit to New Zealand since 2002, the pair, married for 45 years, said they felt nostalgic each time they returned despite the country becoming increasingly modern.

"It's like growing up as a child in England in the 1950s, but with all the technological advancements," Mrs Walker said.

The pair arrived in Christchurch on New Year's Day, but left quickly, having seen the Garden City on previous trips and preferring to remember it pre-earthquakes.

They had travelled to Geraldine, stayed two nights, then headed for Oamaru via Cave.

They were bound for the Dunedin area yesterday afternoon, before moving on to Garston, Lake Pukaki, Mount Hutt, Hanmer Springs and the Nelson area, then crossing to explore the North Island, concluding with a fortnight-long stay on Waiheke Island ending on March 8.

In good spirits on the third day of their three-month trip visiting old acquaintances the pair nonetheless had dark predictions for their homeland in years ahead.

"It's not too bad for us at the moment. Greece really has major, major problems though," Mrs Walker said.

"I personally think we are in for a long, deep depression.

"In a way I'm glad I'm old; if you're not well qualified you will be struggling."