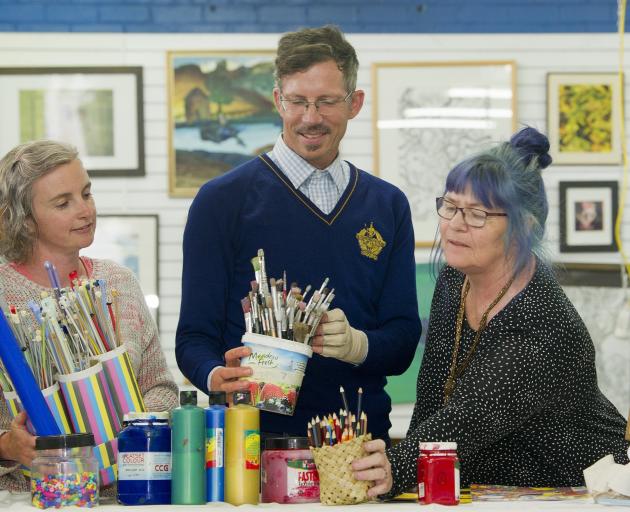 Oamaru artist Natalie Carpenter and peer support worker Toni Huls were in Dunedin this week for a day’s training at Artsenta, in preparation for the project’s start in Oamaru in a fortnight.

"We have done outreach work for many years, but this pilot project is a new way of doing it which is much more involved and developed, and rather than sending people from Dunedin, we are hiring local people," Artsenta director Paul Smith said.

Ms Carpenter would provide the artistic element of the programme while Ms Huls, who also had an arts and crafts background, would bring a mental health perspective to the work.

"It’s about understanding the needs of the people who have come to us," Mr Smith said.

"For some, it could be the first time that they have engaged any kind of mental health service and so having someone who has experience and awareness is important.

"Those two skill sets working together, I think, make for a unique and effective programme,"he said.

The pilot scheme has been part-funded by the Waitaki District Council through its Covid-19 resilience fund, and further contributions from the Southern District Health Board and the Community Trust of Otago.

While the creative wellbeing sessions being provided through the pilot had a mental health focus, they were for "any and all who feel the need", Mr Smith said.

"The focus will be on wellbeing through creativity, which is what we do, but we are trying to get out of the main centres and provide that in the regions."

About 72 sessions would be provided in Oamaru, Palmerston and Kurow on a weekly basis over the next six months.

"What would be ideal for us would be if we could not only deliver the service in the Waitaki region but also in other centres: we could have people up in Central, Alexandra, Cromwell and Wanaka do one session a week," Mr Smith said.

"Those are the places we want to get to, but first you have to do your pilot project and see how it goes."

The first Waitaki session will be on February 9, and plans are in place to deliver the sessions virtually, should Covid-19 restrictions be reimposed.