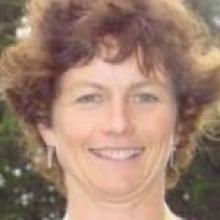 Jane Matchett
Some new boats may soon take pride of place near the Moeraki waterfront - but they will be for children only.

Improvements are being made to the Moeraki park area below the town's camping ground.

Installing the equipment would start "very soon", she said.

A sum of $20,000 from the board's general improvements fund is being used for the project.

Bike track: Funding of up to $15,000 has been approved for the development of the Moeraki bike track. The board was told Hamish Seaton, of Mountain Bike New Zealand, had mapped out an easy access route around the track area with grades not exceeding 5%.

The proposed connection between the bike track, the main bike park and the Moeraki boat harbour area would remain on hold until land stability and future road and walkway issues and routes were determined, Mrs Matchett said.

Trees issue: The laying of ducting for a fibre-optic cable through Palmerston has left the town with problems over the trees taken out for the project. The bulk of the trees were removed from the road edge between the public toilets in the town centre and the railway overpass at the north end of the town.

The community board was told the ducting contractor, FX networks, had agreed to fund 50% of the cost of buying, planting and irrigating replacement oaks.

The New Zealand Transport Agency and OnTrack had been approached for the remaining 50% of funding but the response had not been encouraging, the board was told.

Upgrade funds: All the money allowed for the Palmerston town centre upgrade had been committed to stages one and two of the upgrade, Mrs Matchett said.

Stages three and four of the upgrade, including the work along the main road and the railway line, would not be done until further funding was available.