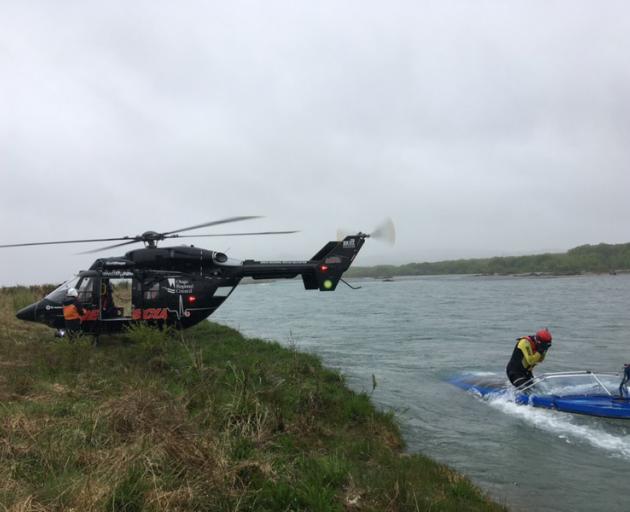 Rescue helicopter and search and rescue crew search the Waitaki River near Duntroon on Friday where a man fell from a boat (pictured) after it capsized near Black Point.
A body has been found by searchers looking for a missing person at a North Otago river where a jet-boat overturned.

The search was launched in the Waitaki district yesterday after a man fell from the boat when it capsized on the river.

Emergency services were called about 2.25pm yesterday after it was reported the boat got into trouble on the northern side of the river near Black Point, about 53km northwest of Oamaru, about 11am.

Police have confirmed that a body had been found near Black Point this morning, and a formal identification and post-mortem would take place.

This morning jet-boats from the Duntroon area and Dunedin LandSAR members joined the search, which resumed at 7am.

Sergeant Tony Woodbridge, of Oamaru, said three people were on the boat at the time of the incident, but only two were able to make it back to shore.

The men walked to a farmhouse and raised the alarm. It was not known what caused the boat to capsize.

A helicopter crew joined Friday's search shortly before 3pm, and a land search and rescue operation, based at the Duntroon Domain and involving more than a dozen people from North Otago Search and Rescue and Upper Waitaki Search and Rescue, started late yesterday afternoon.

A dive team from Dunedin had also joined the search party and four jet-boats scoured the river for several hours. Police also conducted a short search around the Waitaki River mouth.

The jet-boat was located in the river late yesterday.

A police spokesperson said the two people who made their way to shore were taken to Oamaru Hospital by ambulance in a moderate condition.

Sgt Woodbridge said the missing man's next of kin had been advised of the situation.