Bomb stung a little but plenty of fun

This week I was told by North Otago bureau chief Rebecca Ryan she had a story for me.

Little did I know that it would involve me doing something I hadn’t done for something like 25 years — a bomb into a swimming pool. 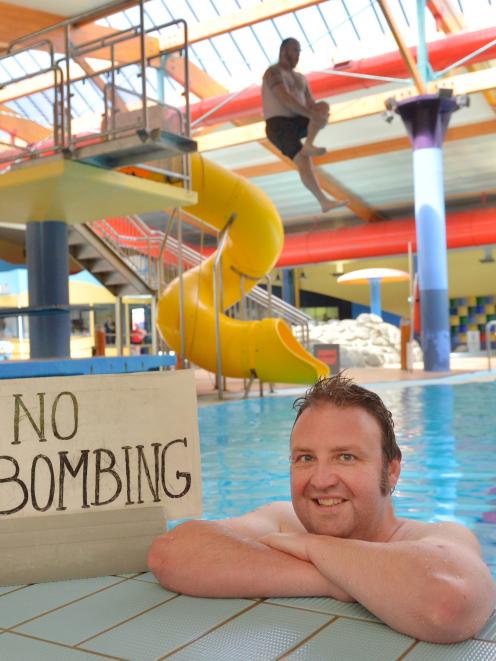 Oamaru reporter Daniel Birchfield celebrates the return of bombing at Oamaru pool.
Perhaps somewhat foolishly at the time, I went along with it.

The Waitaki Aquatic Centre in Oamaru will today reopen its bombing platform, which has been closed for about 20 years, after it was identified as being "dangerous", centre manager Matt Lanyon said.

"Back in 1999-2000 when the pool was opened, they had a 3m springboard on the 3m platform. Unfortunately when the place was built, they didn’t allow for a low roof so after a couple of months of use it was taken out and the existing platform was left. It’s been sitting there for almost 20-odd years being unused."

In fact, people could touch the roof when they jumped off.

On Thursday, I was lucky enough to give the platform a test run.

It does not look high from the ground, but does when you are up there. Trust me.

I was slightly nervous, not so much because of the height, or that I had my dad-bod out, but rather how my bombing technique would fare.

As the countdown started, I braced myself and took the plunge, contorting myself into the traditional bomb position on the way down.

It may have stung a little as I hit the water, but the fun of it all helped with that.

Daniel takes the plunge. PHOTOS: GERARD O’BRIEN
And that is what it is all about really.

It took me back to my childhood, which, as I’m sure most will agree, few things manage to do successfully these days.

Mr Lanyon said the reason why it was decided to reopen the platform was simple.

"We were just looking for a way of utilising what was already there. Also, we were talking to our customers and our customers were saying they wanted that wow factor and something extra to do."

If this 38-year-old enjoyed it, then anyone will. So please, give it a crack.