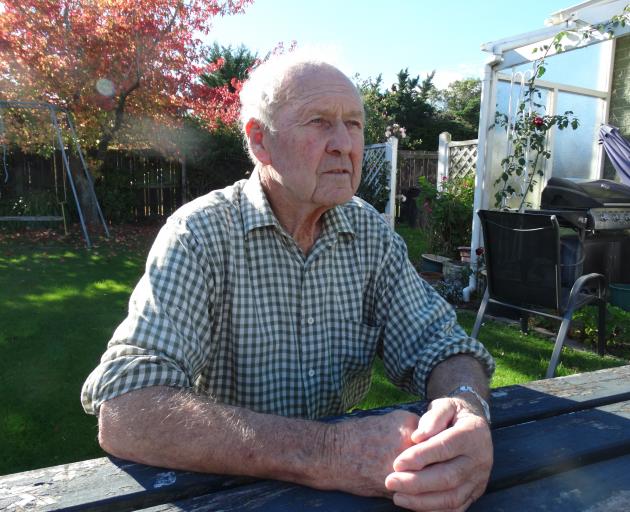 Oamaru man Gilbert Ellery (82) paid $255 for the shingles vaccine Zostavax and was concerned others might not be able to afford it. PHOTO: DANIEL BIRCHFIELD
An Oamaru man is questioning why he was forced to pay more than $250 for a shingles vaccine when others two years his junior do not have to.

Gilbert Ellery (82) recently received a letter from his medical centre that explained shingles and flu vaccines were available and he should consider getting them.

Although he got the fully subsidised flu jab free of charge, he paid $255 for the shingles vaccine as he is two years older than the subsidy allowed.

The shingles vaccine, Zostavax, is funded for people aged 65 years and those aged between 66 and 80 as part of a Ministry of Health ``catch up'' programme until March 31, 2020.

Mr Ellery, who suffered from shingles about three years ago, was surprised he did not qualify for the subsidy and believed it should be available free of charge to everyone over 65.

``It's not the cost of it, it's the principal of the thing. But, it would be a large cost to some people. There's a lot of people that can afford it, but a lot that can't.''

In an emailed response to questions from the Otago Daily Times, Pharmac chief executive Sarah Fitt said expert advice was sought from the Pharmacology and Therapeutics Advisory Committee when Zostavax was considered for funding.

As people got older, the vaccine was less effective, she said.

``They noted that the efficacy of the vaccines varies significantly depending on the age of the person receiving the vaccine, with vaccine efficacy dropping to 18% in people aged over 80 years at the time of the vaccination.

``On the basis of this clinical advice, we have targeted funding for the shingles vaccine to those patients that will benefit most.''

Mr Ellery said for him the cost of the shot was not an issue, but he was concerned about the potential financial impact on others.

``In my opinion there are a lot of people in my age bracket and they will be holding back because of the cost. That is unreasonable to me.

``I think it should be the same as the flu. For people that suffer from shingles, it's probably worse than the flu.''

He knew of others who had not been vaccinated because of the cost.

Shingles, a long-term effect of chickenpox, is a painful rash that lasts from 10 to 15 days, accompanied by nerve pain that could last long after the rash had disappeared.

It was more common in older people.

This week is Immunisation Week, being promoted by the Southern District Health Board, which is encouraging people over 65 or pregnant to be immunised.