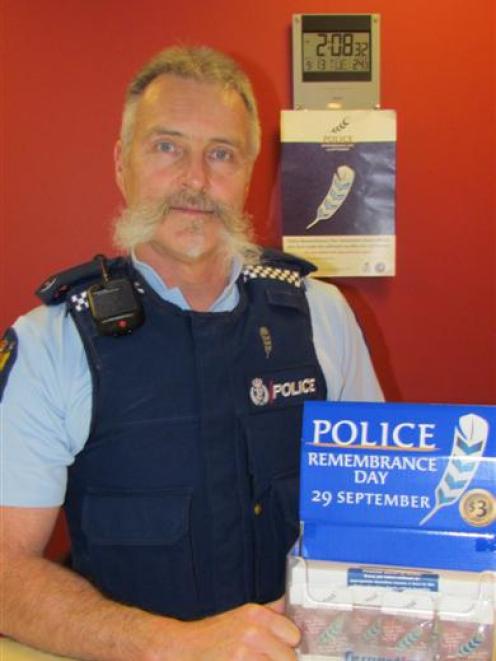 Secretary of the Otago Area of the New Zealand Police Association Bruce Dow, of Oamaru, knows better than most about the dangers of being part of the thin blue line. Photo by Ben Guild.
Senior constable Bruce Dow reckons he has had a relatively easy 39 years in the police force.

The Otago secretary of the New Zealand Police Association has been punched, kicked, bitten and spat on, and had a rifle pulled on him, but has never been admitted to hospital with serious injuries.

Still, he is wary about attending the front desk of the Oamaru station unless he knows who is on the other side, and why they are there.

And he never sits next to the windows in the station without the blinds drawn, because there are a small minority of people out there "who hate us".

Overly cautious, perhaps, but then, he knows what it is like to walk a dead man's beat.

He was called to tend the Ranfurly police station for two weeks in 1990 after Senior Constable Peter Morris Umbers was attacked and left to die on the road by robbery suspect Richard Thomas Lakich.

Beside Snr Const Umbers' body on that deserted roadside near Ranfurly on May 27 lay his police baton - which had been turned on him - smashed and splintered into pieces.

The fortnight left an indelible impression on community Const Dow, who covered the station in a relieving capacity and saw Const Umbers' children coming and going from the adjoining house.

So he, more than most, he appreciates the importance of raising money for Police Remembrance Day on September 29.

"The Police Families Charitable Trust was set up to identify the individual needs of a family who have had their lives altered forever," he said. "It is intended to financially assist them and to let them know that police families are not forgotten."

People will be able to buy a blue and white striped remembrance pin - signifying the tail plumage of the extinct huia, considered tapu by Maori - from police stations for a minimum price of $3.

The money raised will go to the families of slain officers.

Twenty-nine New Zealand police officers have been killed in the line of duty. Their plaques adorn the wall of remembrance at the Royal New Zealand Police College in Porirua, which Const Dow said was the one place an officer did not want their name to appear.