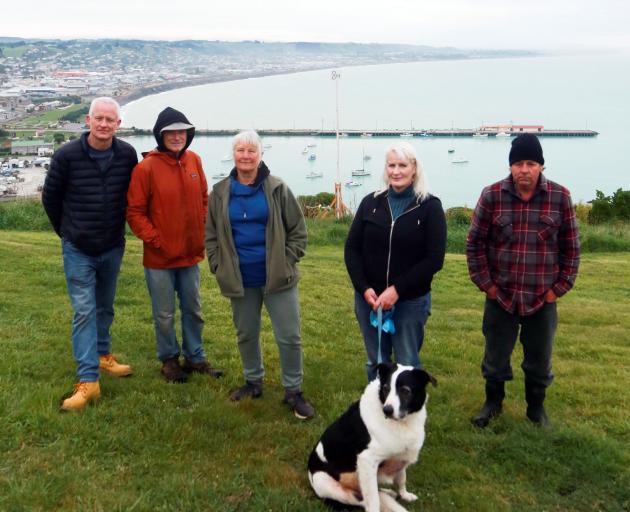 The Friends of Oamaru Harbour group, which aims to protect the heritage, natural and wildlife appeal of the Oamaru Harbour area, erected an 8m post at Lookout Point on Monday, to demonstrate how a housing development at Forrester Heights could block the community’s view of the harbour.

In the district plan, the maximum height for buildings in a residential zone is 8m.

‘‘You realise the entire harbour disappears behind what could be the buildings along [there], which makes Lookout Point a bit irrelevant, really,’’ co-ordinator Vicki Jayne said.

‘‘We thought it would be intrusive, but the level of intrusion is quite surprising — startling.’’

It was an important factor for the public to understand and consider when the council launched its consultation on the future of Forrester Heights, the council’s 2.5ha property overlooking Oamaru Harbour, Ms Jayne said.

The land has a controversial history. In 2006, consent for a 27-section subdivision was granted, but the council then found it could not issue titles nor go ahead with selling them until reserve status over some of the land was lifted.

The consent lapsed in 2011, and in 2013 the status of the Forrester Heights land was changed from reserve to endowment, correcting a clerical error made in 1937, giving the council legal entitlement to sell the land for residential sections.

After the council announced there had been recent approaches by several parties interested in development, in August councillors voted to carry out a public engagement process and ask Waitaki residents what direction the council should take.

Options would include doing nothing, setting aside the land as a green space reserve, developing it as a reserve similar to Cape Wanbrow, selling it, or seeking partners for a joint venture.

The issue of blocking the view had been brought up ever since discussions about a subdivision started in 2004 — and people were as passionate about it as ever, Friends of Oamaru Harbour co-ordinator Katrina Hazelhurst said.

Ms Hazelhurst described the view as ‘‘iconic’’ and said it was important to protect the green space for future generations.

If a housing development went ahead, the current view enjoyed by everybody would be restricted to a small group of homeowners, she said.

Waitaki Mayor Gary Kircher agreed that the view from Lookout Point was special and said the council would not allow buildings to block it.

If the council decided to sell the land for development, Mr Kircher could not guarantee the view from Lookout Point would not be impacted in some way, but he disputed Friends of Oamaru Harbour’s 8m depiction.

‘‘We would not be selling that land without covenants around height restrictions,’’ he said.

‘‘My intention is that when we go out to the public to ask their opinion, we will give a clear indication of what those covenants might be, including height restrictions, to ensure Lookout Point isn’t affected in any significant way.’’

The consultation process was still being designed, and the timeframe had not yet been confirmed, he said.

‘‘We’ve signalled we want to have that conversation, we will have it, we will be asking the community what they want and we’ll get their feedback.

‘‘We want to make sure that when we go out, we give a very clear idea of what could or couldn’t happen, and they comment on that not on some mistaken belief because of some of the arguments that are being made at the moment.’’