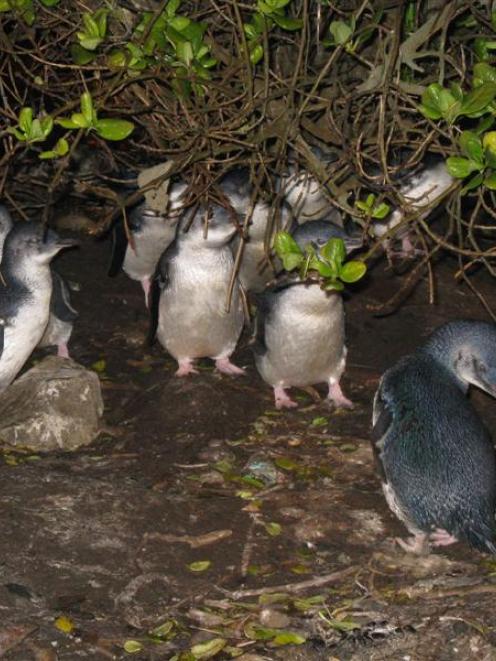 A group of penguins seek shelter under a bush at the Oamaru Creek penguin refuge. Photo by Lorraine Adams.
"People just everywhere" in the Oamaru Harbour area at night are causing problems for the resident blue penguin population, environmentalist Lorraine Adams says.

Some nights over the summer, it had been "total madness", with problems occurring because there was no control over people leaving the blue penguin colony, she said.

As they left the colony, there were "people just everywhere" and many did not realise there were penguins all around the harbour area.

She received a letter from English tourist Libby Howard-Blood, who visited Oamaru last month, saying how upset she was with the "tourist invasion" of the penguins' home.

She was saddened to see tourists photographing the birds "within a few feet" of them, blocking their path from the sea to their chicks and "generally being unaware of how to behave".

Ms Howard-Blood suggested a warden patrol the area and she also suggested the car park be shifted so people had to walk in.

Miss Adams believed there were simple solutions, including providing more information for visitors, bold "penguin crossing" signs at night and removing vehicles from the area.

It was getting worse each year, she said.

When contacted, Oamaru Blue Penguin Colony manager Jason Gaskill said Miss Adams was welcome to discuss her concerns with him.