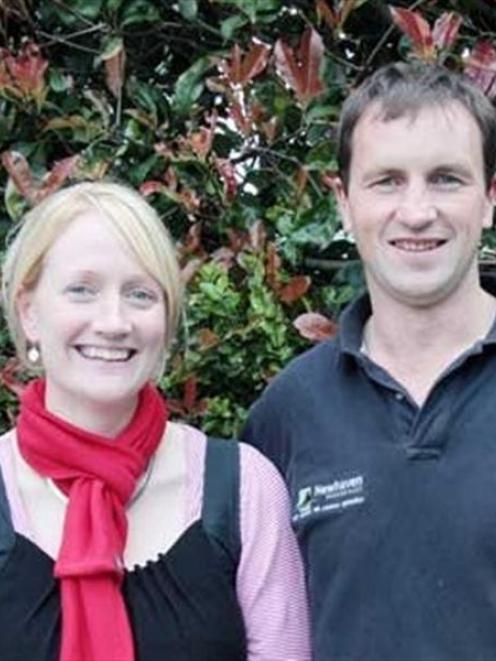 Five Forks farmers Jane and Blair Smith have been rewarded for their care of the environment. Photo supplied.
North Otago couple Blair and Jane Smith have been named supreme winners of the 2012 Otago Ballance farm environment awards.

The judges described Mr and Mrs Smith as "incredibly driven individuals who continue to challenge themselves to meet their personal and business objectives".

While still in the early stages of their farming career, they demonstrated excellent care of the environment in parallel with the wise use of fertiliser, based on a very good understanding of soil, animal and pasture requirements.

The couple showed a high level of entrepreneurship in the new challenges they tackled and were very aware of what was happening globally and locally in the marketplace and their industry as a whole.

"They have surrounded themselves with a fantastic support network that should ensure the continuation of their success.

"Their sound financial management and an impressive formal business structure help them to get the best from the people in their business," the judges said.

They also demonstrated a "commendable commitment" to industry and community organisations.

Mrs Smith won the Royal Agricultural Society's New Zealand young rural achiever award in 2003 when she was in Gore and a senior field officer for Ravensdown Fertiliser. She later joined Rabobank in Oamaru, as a rural manager. Mr Smith grew up on a sheep farm in Southland and then spent 10 years in the rural transport industry.

The home block, Newhaven, and the Danseys Pass farm were used largely for intensive sheep production, while Blairgowrie was run mostly as a cattle breeding and finishing unit.

The sheep operation includes both commercial and stud sheep.

The successful Newhaven Perendale stud was founded by Mrs Smith's parents, David and Robyn Ruddenklau, in 1972.

Newhaven was planted in shelter belts established by Mr and Mrs Ruddenklau, while Mr and Mrs Smith continued to plant Blairgowrie with shelter-belts and and woodlots while also endeavouring to maintain and protect the tussock landscape.

More than 60,000 trees have been established on Newhaven and the other farms, often in harsh climatic conditions.

Native falcons and wood pigeons lived undisturbed on the hill country and freshwater crayfish had been introduced to contained waterways.

Last year, Mr and Mrs Smith planted 16ha of Douglas fir for carbon sequestration and as part of a strategy to learn more about carbon credits and the Emissions Trading Scheme.

A field day will be held at Newhaven at a later date.