Day at the races about family, community

Timaru's Leanne Ryan gets a hug from her husband, Greg, after their horses finish one and two in the fourth race at the Kurow Races yesterday. Photos: Hamish MacLean
Tailgate barbecues, cold drinks with mates, summer dresses and family get-togethers were as much the order of the day as horses at the Kurow Racecourse yesterday.

The Kurow Jockey Club's annual day was not all about the $25,000 Kurow Cup, or any of the other seven races - it was a big day for the community in the Waitaki Valley, Kurow Jockey Club president Simon Williamson said.

''It's the biggest day in the Waitaki Valley,'' he said. ''It's a community day. And a lot of the people here aren't racegoers, they're holidaymakers camping around the lake having their annual day out, really.

''It's huge - it's for the community, it's a get-together ... everyone comes out and talks to their neighbours and their friends. It's a great family get-together; there's never any trouble; everyone brings their barbecues and their chilly bins.'' 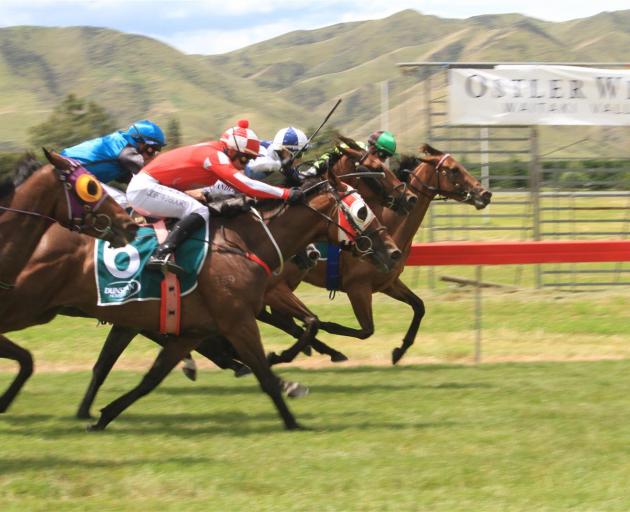 Race 4, the Oamaru Jockey Club Maiden 1400, features a close finish.
About 5000 people showed up on the 29degC day in Kurow and ''everything's been done by locals''.

''The fields are good, the trainers have always supported us as well. We take great pride in our track, it's come up as a good three today, which is perfect for racing on ... which means it's got a bit of sting out of the ground.''

Surveys of racegoers showed that 17% of those who attended were at races for the first time - ''and 100% of them enjoyed their time and said they would come back again''.

''For thoroughbred races that's a great story in itself, isn't it. That's how you attract people to the game.'' 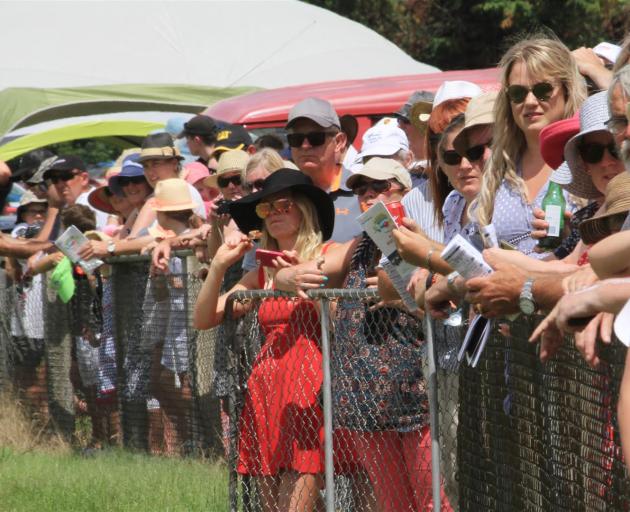 Crowds line the fence to watch the fifth race at the Kurow Racecourse yesterday.
Barry and Heather Gray, of Haka Station, had two horses racing yesterday - Haka Star and Benlachie. Mr Gray said it was important for him to have a race meeting in his own backyard so he could enjoy the day with loved ones.