Disappointment church to be sold 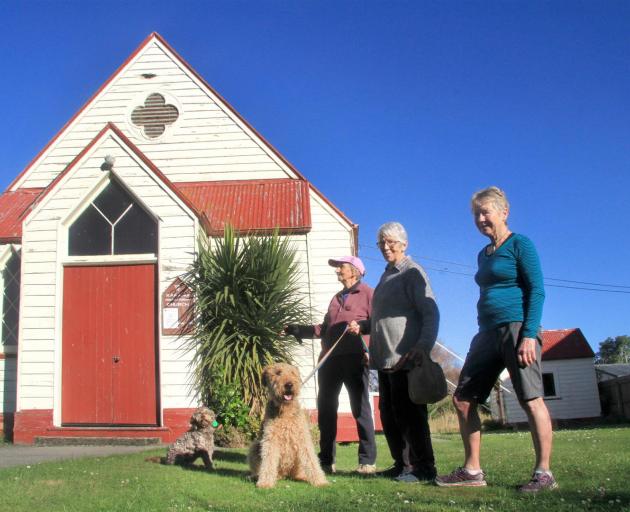 Lamenting the decay of the St Paul's Maheno Otepopo Presbyterian Church in Kakanui are (from left) Tricia Pope, of Reidston, with Polly, Margaret Chetwin, of Kakanui, with Mungo, and Jane Green, of Kakanui. PHOTO: HAMISH MACLEAN
After nine frustrating years of work by locals trying to save the wooden church designed by Robert Lawson, the historic Kakanui building is being put up for sale.

Residents say the church, built in 1870, is a well-loved community landmark, and they had been keen to save it, including by providing funds to help with its conservation maintenance.

Two concerned Kakanui residents, John Chetwin and Jane Green, said yesterday that the deterioration of the church and the failure of collaborative efforts to save the building for community use was a "disgrace''.

Meetings had been held between the community and church authorities about nine years ago, and collaborative attempts had been made to undertake much-needed maintenance and restoration, they said.

But church authorities could not rule out the possibility that the church building would be sold at some point in the future.

This would have undermined the point of having the church protected and upgraded for community use, so the community initiative had lapsed.

Mr Chetwin said no significant maintenance had been done by church authorities, and community initiatives were also stymied because of fears the church could have been later sold, in any case.

Synod of Otago and Southland executive officer Fergus Sime said the decision to sell the church had been made within its parish, St Paul's Maheno-Otepopo Presbyterian Church.

The parish could still exercise control over the church's future by choosing who it wished to sell it to, which could include a potential buyer wishing to safeguard the building, Mr Sime said.

Parish minister the Rev Rose Luxford said the church's history had been a "long and winding road'', and the decision to sell it "had not been made lightly''.

It was unclear what would happen after any sale, but there were some grounds for hope, she said.

Dunedin resident David McClea who grew up in Kakanui and worshipped at the church for many years, said

he was concerned about external rot at the back of the building and he was worried about its future.