By Daniel Birchfield
0 Comments
The sound of royal wedding bells is in the air, which means excitement is building at Iona Enliven Care Home in Oamaru, where the nuptials are being celebrated in regal fashion.

To mark the wedding of Prince Harry and Meghan Markle at St George’s Chapel in the grounds of Windsor Castle  tonight, Iona has more than 80 wedding dresses on display surrounded by red, white and blue bunting.

They were donated for display by Iona’s residents, staff, volunteers and their families, while some members of the public had also loaned dresses for the display.

"It’s just amazing where they have come from."

The oldest dress on display was worn by Olive Leslie (nee Wilden) when she married Dave Leslie in Dunedin on April 17, 1920.

The couple were the grandparents of Lyndal Harvey, who works at Iona. 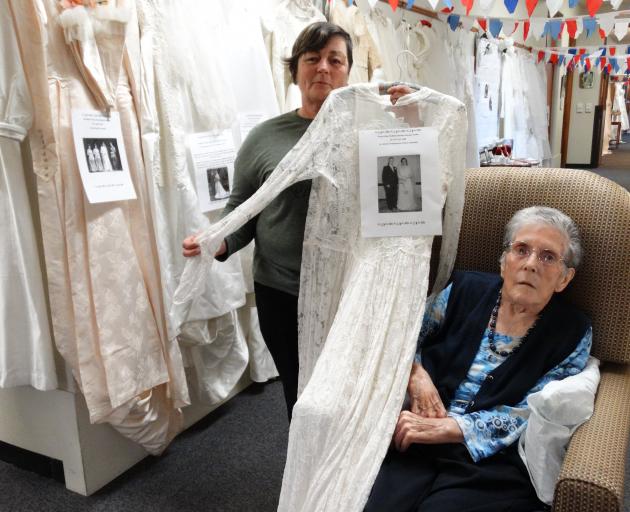 Susan Clark (left) and Evelyn Clarke at Iona Enliven Care Home with the wedding dress they wore at their respective weddings. Mrs Clarke was married in 1956 and Mrs Clark in 1981. The dress is one of 87 on display to celebrate the wedding of Prince Harry and Meghan Markle tonight. Photo: Daniel Birchfield
As well as the dress, she still has the top of her grandparents’ wedding cake.

Mrs McCone said the display had created plenty of interest at Iona.

"It stimulates our residents and gets them really interested and it gets their families interested. They remember so much. They really love talking about their weddings. Not all have their wedding dresses of course, a lot have been torn up for christening gowns ... anything really."

She said there was a story behind each dress.

One of those involved a dress worn by a mother and daughter — Evelyn Clarke (nee Dickson) and Susan Clark (nee Clarke).

Close to twenty-five years later, on October 10, 1981, Mrs Clark married her husband, Murray, at his parents’ property at Alma, a few kilometres south of Oamaru. 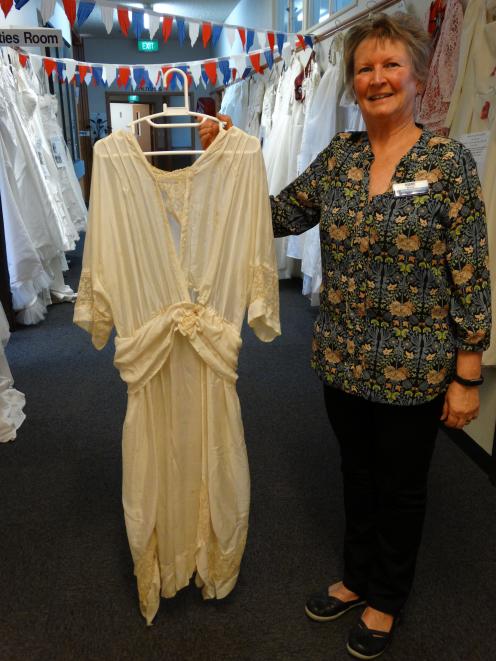 Iona Enliven Care Home activities co-ordinator Diane McCone with a wedding dress worn in 1920. Photo: Daniel Birchfield
Mrs Clark said although her mother was a seamstress, she believed the dress was made by someone else.

She had admired it for years and wanted to wear it at her own wedding, which her mother agreed to.

"I liked the look of it. I like the lace and it had a nice, long veil. I said if it fitted me could I wear it and she said yes. She was quite honoured that I had asked."

She said it made her special day even more so.

"I felt special in it because it was mum’s."

However, it has not become a family tradition.

"Unfortunately, our eldest daughter is quite short so the dress would have had quite a lot of alternations for her to get into it and it wasn’t the style she was  into."

Mrs Clark felt Iona had done a wonderful job with the display.

"I think it’s marvellous and it’s really good to see the other dresses here as well. There’s some quite old ones here . . . it’s nice to see."

When asked if she would be watching the royal wedding Mrs Clark said she had other commitments, but might watch the coverage at a later date.

Mrs McCone said a lot of Iona’s residents were counting down the hours until the big occasion.

"They are abuzz. A lot will watch it on the television, even though it’s late. They’re just loving it."

A "right-royal" afternoon tea would be held on Tuesday and some of the dresses modelled on the same day.

There had also been plenty of chatter at Iona about what colour headwear the Queen will wear.

Blue is the favourite with British bookmakers, but Iona’s residents have leaned in a slightly different direction.

"We’ve even got a bit of a sweepstake going . . . most of the residents think she’s going to have a turquoise coloured hat, but I think it could be coral."

The dress display would be up until after Queen’s Birthday weekend and thought was being given to opening it to the public for a gold coin donation.

"We will talk to the residents about letting the public in," Mrs McCone said.