End of era for Victorian Tearooms 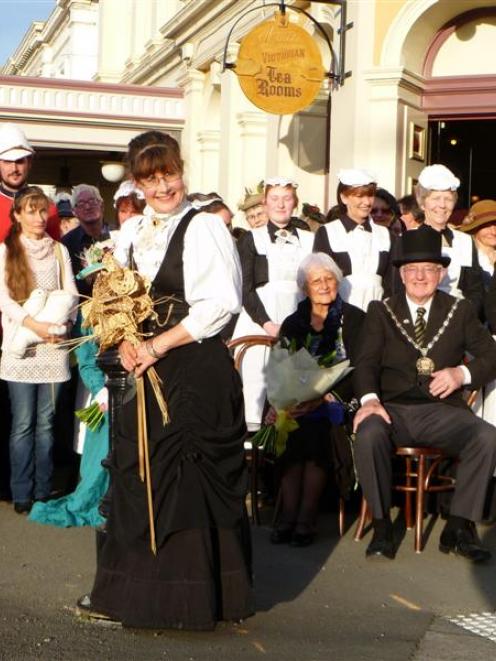 The ''grand closing'' followed a similar style to her grand opening on October 11, 2011, after she had turned the empty ground floor of the former AMP building on the corner of Itchen and Tees Sts into a tearooms.

She even changed its street number - the building was 21 Itchen St, but it changed to 1 Tees St - in recognition of her teas.

''I thought Itchen for a tea wasn't really that good,'' she said at the closing yesterday.

About 200 people, many of whom had been at the grand opening, heard how Ms Baxter came from Diamond Harbour to Oamaru to set up a tearooms which became an integral part of Oamaru's Victorian heritage.

It boasted old-fashioned teas (and coffee), served by maids and the occasional butler in Victorian starched attire, accompanied by true Victorian manners and courtesy.

Even yesterday, four staff were at the door to greet ''madam'' and ''sir'' or ''gentleman'' as they arrived.

What was supposed to be about an hour of ceremony turned into closer to two, because so many people wanted to pay tribute to the diminutive but energetic Miss Annie and her creation.

Master of ceremonies David Wilson described it as ''a great celebration, tinged with some sadness''.

Waitaki Mayor Alex Familton said Ms Baxter was an ''energetic, capable person who built a wee block of Victoriana with style and personality''.

St Luke's Church vicar the Rev Tim Hurd said she had taken a ''prominent building waiting to be used'' and added colour, soul, fun and character.

''It felt complete, alive and connected [to the historic area],'' he said.

Ms Baxter said that while closing was sad, there was ''always a bright side to life''.

She would stay in Oamaru and continue to organise the Tea Party on Tees in November, part of celebrations for Oamaru's 150th.

''Picnics and good tea - that's what the Empire was built on.''

She thanked people ''from the bottom of her heart'' for their help and support.

The tearooms and store have closed after the North Otago Club sold the building. The ground-floor area is to be turned into an Italian restaurant.