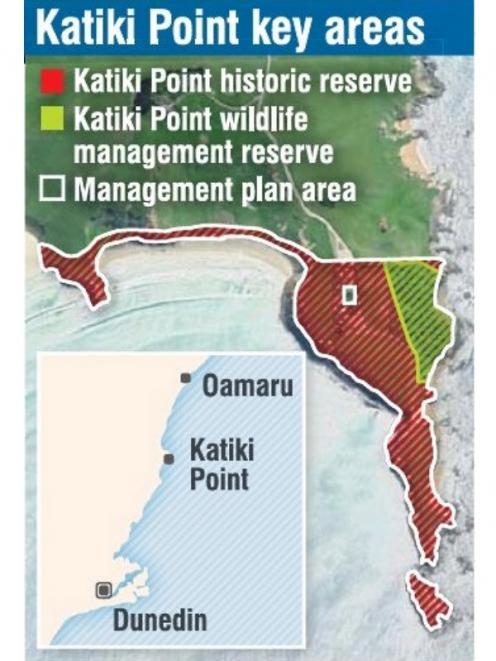 The roughly 10ha Katiki Point includes both a historical and a wildlife reserve; the reserves management plan aims to consolidate the management of the point's wildlife and historical reserves.

''Many generations of tupuna have lived, gathered kai and practised tikanga in this place, so it's of great importance to us as mana whenua. We want to be able to share the culture and wildlife of Katiki Point with manuhiri now, but also with our future tamariki and mokopuna,'' Mr Higgins said.

The site is home to Te Raka a Hineatea pa site, where according to the 58-page draft plan, several generations once lived and up to 2000 people ''kept and protected'' the pa. Archaeological evidence suggests the peninsula was occupied from at least the 13th century.

The area was a battleground encompassing ''many skirmishes as well as a major battle'', but was not chosen simply for the defensive capabilities of its position but also as an important food-gathering area.

The draft plan states both its ''outstanding scenery'' and ''bountiful wildlife'' have contributed to its popularity with visitors - up to 40,000 people visit Katiki Point each year.

Of the 12 species of seabirds and shorebirds which breed at the point, the sooty shearwater and yellow-eyed penguin will get ''conservation management priority'', the draft plan says.

Penguin Rescue, which operates out of the former lighthouse keeper's residence, has helped the yellow-eyed penguin population on the Moeraki peninsula become the largest in the South Island and it comprises about 20% of the mainland New Zealand population.

The Department of Conservation appointed Te Runanga o Ngai Tahu to control and manage the wildlife reserve and a narrow strip of coastal land as part of the greater historical reserve in March last year.

Hard copies of the draft plan are available at Waitaki District Council centres in Oamaru and Palmerston, Te Runanga o Ngai Tahu in Christchurch and the Dunedin office of the Department of Conservation.

It is also available on the Te Runanga o Moeraki website.